Trace: • pcw16
Translations of this page: 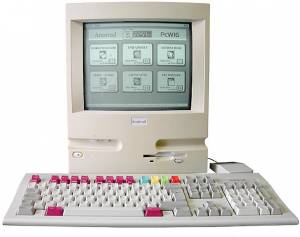 The Amstrad PCW 16 or Anne replaced the PCW 9512 in 1996. It was the last of the range and was a game changer. The Zilog Z80 is maintained but at 16 MHz, the memory is 1024 Kb expandable to 2048. Contrary to previous models, which use a text-based interface, the PCW] ] 16 uses a graphical user interface called "Desktop". The computer doesn't run [[CP/M like the old PCW computers, but it had its own operating system called ”Roseanne“, a graphical user interface written by Creative Technology, which was stored along with its programs in 1024Kb of Flash RAM. You can't run the Soft of older computers, but by ZP/M you can run them, except Locoscript and some games. Although CP/M was not supplied, it is ported to this machine by independent developers. Unlike previous models of the PCW which came with only the Locoscript word processor, the PcW16 came with a full range of built-in software - word processor, spreadsheet, address book, calendar/alarm, calculator and file manager. Fortunately, Amstrad abandoned the Hitachi 3” disk format and switched to the double-density MS-DOS standard 1.44 3.5“ format, which could read all three of the previous formats. The Roseanne operating system could use long file names (up to 31 characters). The screen was also standard: 640 x 480 VGA mode. Amstrad provided various internal expansions for the PCW-16, 1 MB RAM, 2 MB Flash RAM, Application ROM, 2nd FDD drive, Printers, Modems, Psy-Q Development Kit; but it seems that none of them saw the light. It does not have a serial printer but it supports any compatible HP, Epson, Canon and IBM, and a specific series.