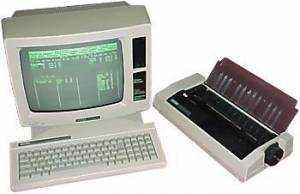 The Amstrad PCW 8256, also known as the Schneider Joyce in Germany, is the first model in the PCW family. Like all the other models, it has a 4 MHz Z80 processor and a monochrome screen with a 720 x 256 resolution.

This computer also has a 3” disk drive and 180 KB per side, and 256 KB of expandable memory. It also came with a matrix printer with its own interface, since the computer does not include standard serial or parallel ports.

The computer was supplied with a copy of LocoScript, a specific word processor for these computers, as well as a version of CP/M Plus, both from Locomotive.

The Amstrad PCW is launched to capture the small business market by offering a computer with a printer and word processor at a lower price than a typewriter. It is widely accepted despite the insistence of 3-inch disks (when 3.5 / 720 KB was already beginning to prevail as a market standard), since Amsoft is dedicated to converting CP/M applications to that format, to the point that it is easier to find Dbase II in 3 inches than in the native 5'25. Even Microsoft releases all its CP/M compilers in that format. Due to the price of the disc, it is not long before kits appear to connect 5.25 (external) and 3.5 (external and internal) units, in this case requiring modifications. Unexpectedly, the software houses start releasing games for PCW, showing that the GSX extension (on which the PC/ST GEM is based) is not only valid for graphics and diagrams. The RS232/parallel interface allows the connection of other printers (some programs start to support HP lasers) and they are starting to be seen on PCW users' BBS. Finally, Hard Disk drives appear from 20 to 40 Megabytes.

In Germany Schneider distributes them under the names Joyce and Joyce Plus.

In the USA it makes a brief incursion together with the PC 1640, but they are quickly swept out of the market by the powerful catalog sales (several announcements of liquidation of equipment are seen). It is possible that the USA and German plates have differences from the rest of the European ones.

In Spain, the traditional scarcity of peripherals makes the use of other printers very expensive, so as the PC market becomes cheaper, they are declining. They stop being seen in the offices with the replacement of the 9 needles by the ink jet. For a time, a PCW→PC file conversion market was generated.

The outer packaging is a cardboard box, inside which is protected by white cork against possible knocks, the green phosphor monitor with a 3“ 180Kb unit incorporated, a matrix printer, a keyboard, the manuals (volume 1 Losocoscript, CP/M and Logo) and (Volume 2 Mallard Basic), two 3” disks containing the Locoscript word processor, CP/M, Utilities and Dr.Logo. Some teams gave away some program for the purchase of it, in this case, as can be seen in the images, the promotion was a pack made up of the Amsfile, supercalc2 and accounting programs.