Trace: • knight_lore
Translations of this page:

Long have I traveled from the heart of the Wolf Jungle to the Castle of the Wisdom Knight, seeking the old Warlock to beg him to help me leave this rhythm of death. For many nights I have had to sleep chained to a tree to avoid misfortunes and regrets. Today, finally, I am in the Castle…

The end of my journey is near. When the last light of the day gives way to the dark night shadows, when the red rays of the sun fall before the white moon, I feel behind me the cold and long fingers of the night.

My footsteps echo on the worn, mossy walls of the great room as I cross the drawbridge. I feel the influence of the great Magician Melkhior on me, locked in a labyrinth of corridors, surrounded by dangers and traps.

Suddenly, a cold blue mist begins to rise from between the cracks in the wall. Little by little, it begins to take shape and becomes a powerful and convoluted whirlwind of energy. The air sings old and dark songs of forgetfulness and sadness. The mist disappears and the noise stops.

The torches cast a tiny, sad light on the massive stone walls, barely allowing a view beyond a few feet.

Tiny frozen crystals, stone monoliths, sparkle in the dim light of the slowly rising moon. Surrounded by cold blue light, I am the Werewolf again. My destiny is very simple: I have to find, within forty days, the old Sorcerer and ask him for his help, before staying like this forever.

Throughout the entire tour of the various rooms that make up the castle, we will find a multitude of objects of the most diverse nature. We must collect them, as they are of vital importance.

Its function is double. On the one hand, they are essential when it comes to overcoming some of the barriers and obstacles that come our way, since we can climb on them.

On the other hand, they will serve to help the Magician in the elaboration of the magic potion that will save our hero.

Boots, diamonds, chalices, cups, flasks of essence, etc., must be deposited in the enormous cauldron that boils in the heart of the castle according to the rigorous order that determines a magical glow that arises from it If an object that has not been requested by the cauldron itself, it will have absolutely no effect.

The game will end once we have deposited the fourteen required objects.

Among those that can be located there are also some small statuettes whose only function is to increase the number of lives.

The different control options are: DK'Tronics joystick or Keyboard, with the following layout:

In some rooms, the correct division of time is vital. You have to be careful when entering them, checking the DAY/NIGHT indicator in the lower right corner to make sure that there is no transformation coming, otherwise it could cost you your life since, during the personality change, Sabreman becomes stopped but the game continues, ghosts attack, balls fall, etc.

Any of the creatures can kill you during the transformation!

The Knight Lore is entirely elaborated with a new programming method called “Filmation”, thus achieving a fabulous 3D effect that up to now has not been surpassed by any other program on the market.

The “Filmation” system is a patent of the ULTIMATE house.

Handling is difficult at first, but quite a bit of skill can soon be acquired.

Now, if at first we have decided on the joystick, it will be quite difficult to get used to the keyboard and vice versa.

Within the management options, we can choose whether they are directional or not. In the first case, the character moves in the direction marked by the joystick or keyboard. In the second case, the protagonist turns, without moving, in the same position (from left to right if we press left or vice versa, when pressing right) and finally moves forward with the appropriate key. If we choose either of the two options, it is convenient to always keep the same one to acquire enough skill.

To jump you have to press the appropriate jump key or the fire button on the joystick, depending on the option selected.

However, if it is necessary to cross a great distance, it will be necessary to keep the key pressed for the necessary time. In this way, much larger jumps than normal are achieved. This trick is especially useful for saving spike areas.

One of the most necessary precautions to successfully complete the adventure is to take note of where each of the objects are deposited for a quick location of them. Do not forget that time passes inexorably!

Since our protagonist cannot carry more than three objects simultaneously, it is a good idea, in the first phase of the game, to dedicate himself to collecting objects and depositing them in the rooms next to the Wizard's. In this way, every time you request a specific one, we will not have to go too far to get it.

In most cases where you have to jump, you need to press the jump keys and the forward key simultaneously. In the case of the Joystick, this means pressing the trigger while pushing forward.

There is, however, one specific circumstance in which this should not be done. It is when we try to jump from an object that we have previously climbed on. If it is a question of overcoming a wall, once it has been overcome, we would have lost the object on which we were leaning. The best way is to jump by pressing the jump or fire button at the same time as the PICK/DROP button (backwards on the joystick). In this way, at the same time that the jump occurs, Sabreman will pick up the object that supports him again.

You cannot enter the Wizard's room during the night, as this would mean being turned into a Werewolf, being immediately destroyed by the effluvia that arise from the magical cauldron. We will have to wait for the day to be received by the Warlock and deposit the required piece. 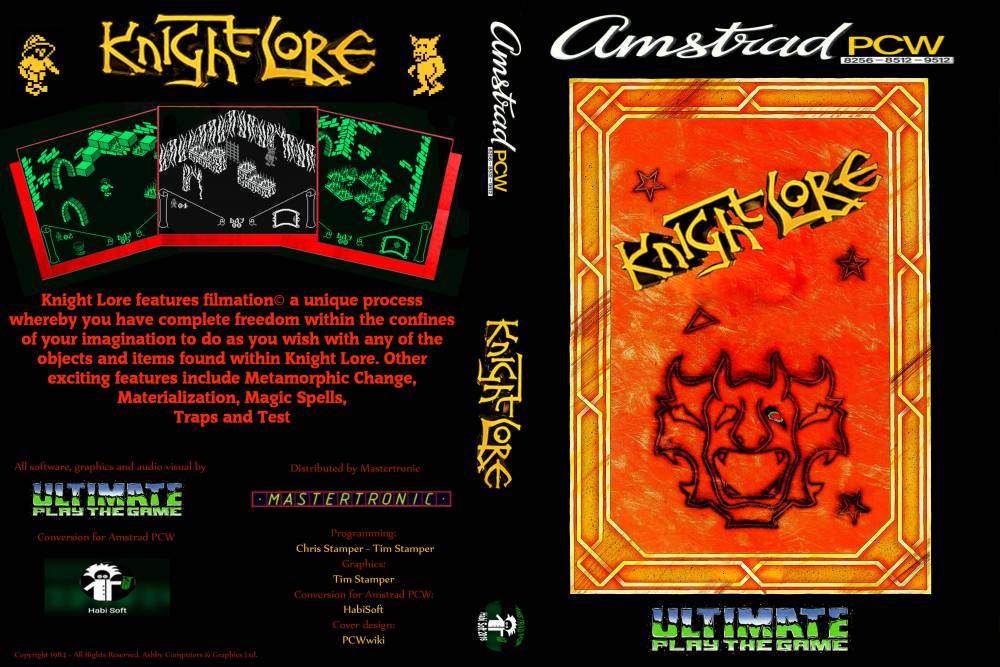 Below you have the manual in English of the game, triptych type on glossy paper. Its measurements are: Width: 40.96 cm x Height: 19.62 cm. 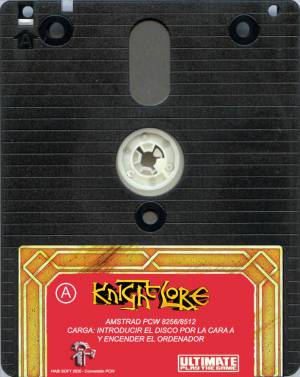 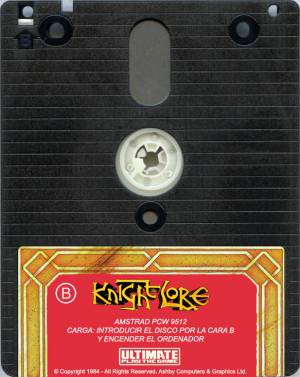 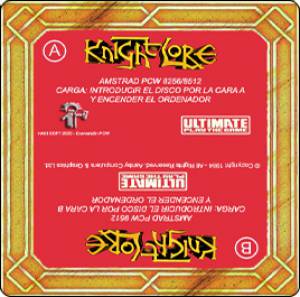 Below is the full game map. Font Speccy Screenshot Maps

Here is the poster of the game. 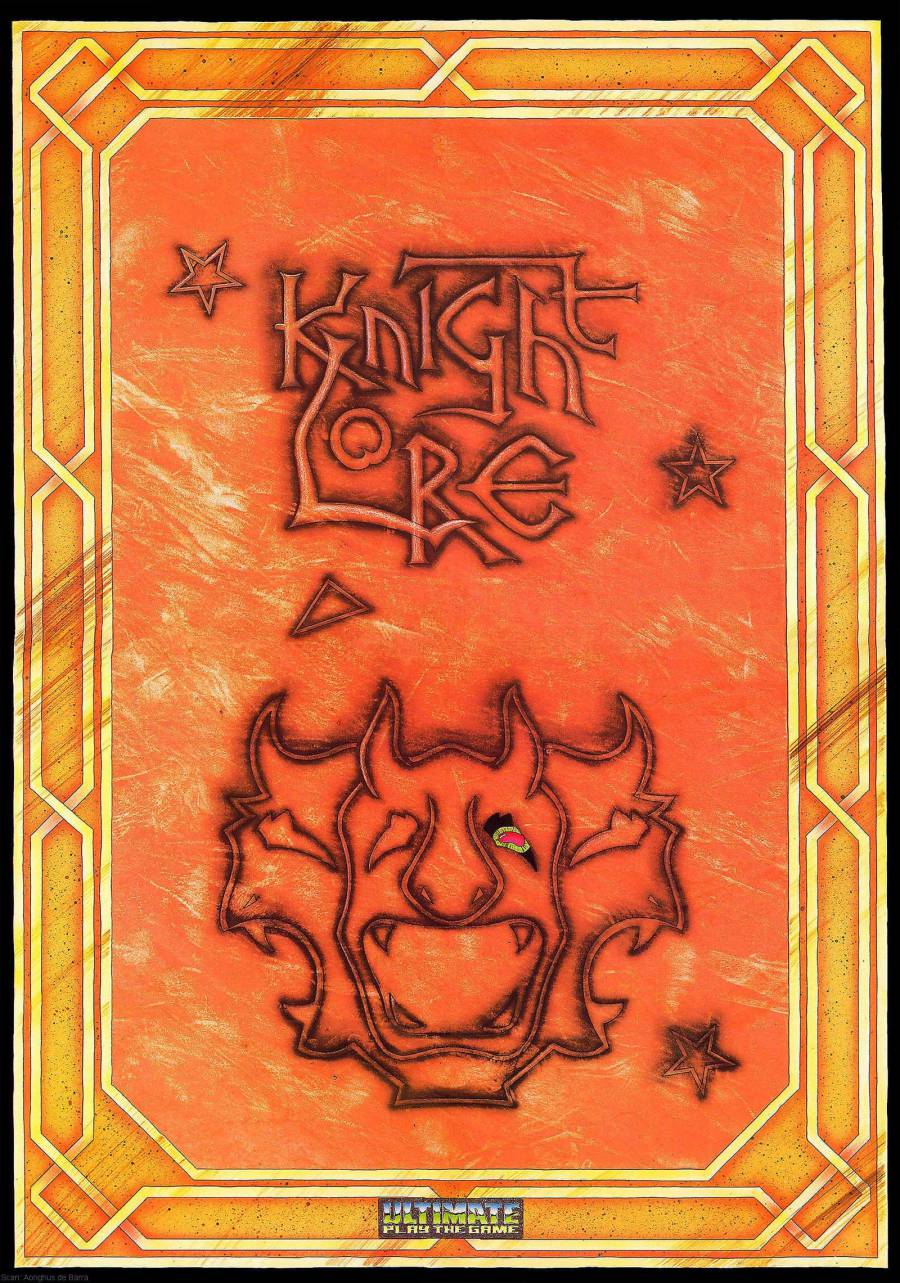