Trace: • stop_press_or
Translations of this page: 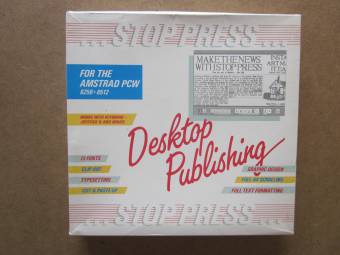 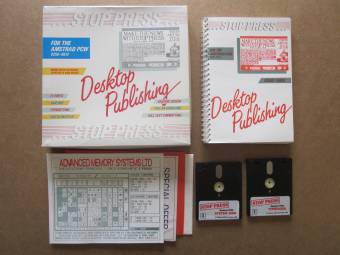 Stop Press, where design is as simple as turning on your computer. Stop Press is, without a doubt, one of the best desktop publishing software for PCW. Its applications are multiple: from the composition of posters, and of course magazine pages, to the use by companies in the presentation of balance sheets with graphs in its three pie, bar and saw modes.

For any user who turns on their computer and starts working with the program, they will be pleasantly surprised by all the possibilities available to them and that will allow them to develop their imagination without any type of limit. The possibility of entering real data to use them later in balance sheet presentations, the multiple ways to enlarge images and a long list of applications make it one of the best programs for desktop publishing lovers.

It has a clear and original menu system, where all the options available in the program are shown without the need to make calls to submenus. True to the motto “a picture is worth a thousand words,” Advanced Memory Systems, the company that created Stop Press, does not include text to identify the options. These are located by means of drawings, with eight columns to select from (in a classic menu they would be the main options). From each column come the different options of which it is composed, accessing them directly without having to activate the main option.

To make it easier and easier for the user to use, the menu is created on a Cartesian grid, where each option is identified in the manual by the drawing it represents, a text related to it and, finally, the coordinates where it is located. found, so it is almost impossible not to find the information you need.

The manual is extensive and details almost perfectly all the options, including several examples. There is also a desktop card for quick consultation.

The ability to move the saved information on the screen is one of the most important features of Stop Press. The user will be able to perform all kinds of movements without any problems.

This option is in turn made up of twelve others, where moving a screen area to another part is the first possibility that it includes, and the most common among desktop publishing or graphics programs. Then, others such as the inversion of images both vertically and horizontally, image displacement, etc., are not as common, but not less useful for that.

Apart from these movements you can increase or decrease the size of a defined window and even lengthen it. This is not only enlarged, but can also be transported from one side of the screen to the other while preserving the original.

Another function that can arouse the user's astonishment is the scrolling of images on a previously defined window. As soon as you activate it, its content will begin to move, disappearing from the upper left side and appearing from the lower right. This direction can be modified by means of the cursor keys, or with the mouse, a situation that is more inconvenient as it has to be constantly moving it in that direction. When the desired position is achieved, the image can be stopped, leaving the graphic in the form in which it was found at that moment.

As for the possibility of reproducing an image, as already mentioned above, it can be done vertically, placing the graphic to the left or right, horizontally with three possibilities: invert the image, flip it, and invert and flip at the same time .

Like any desktop publishing program, it has a multitude of backgrounds that can be expanded either by editing those already created or by designing new ones.

Users inexperienced in desktop publishing programs will be pleasantly surprised to see how they can edit the selected font directly on the screen, being able to include it as part of a page, and at the same time invert it (we are referring to the bottom of the screen). .

Through an option in the text section, you can access the control of the size and separation of characters. This will allow you to widen and lengthen the character, while placing the separation between lines and columns. This can be done with the 12 sizes available (point).

Once the font has been selected and the separation spaces have been calculated, the text is inserted on the page. To do this, a screen is activated in the lower part of which are the possible options available for text processing. It can be justified to the left, to the right, center or leave it as it is being written. In the type of writing, it allows you to underline, fill in the background of the letter, blur the text, tilt it, etc.

This menu has some curiosities worthy of being marked: it does not allow the selection of the type of way of writing until the point where the text is going to start is located. Once selected, the writing format is chosen. Contrary to page editing, when text is entered the program automatically scrolls the display window across the page.

Other possibilities, such as placing text columns and collecting an ASCII file from the disk, complete the options on this menu.

Everything that has been said so far, praising the possibilities of Stop Press, would not make sense if the program does not respond when it comes to graphics compared to the previous one. By cons, it responds as expected, thanks to the amount of resolution of the PCW's monitor.

Like any drawing program, it has the classic geometric figures: square, triangle, ellipse, circle and three-dimensional squares. These figures can be drawn, transparent (they paint the contours of the geometric image, but preserve the content), inverting the background, filling it with a pattern and painting the discontinuous contours. When you opt for this last option, you can make the line more or less dashed using a dotted stripe found in the menu.

If you want to paint the lines, you can use two possible options: drawing with the continuous line option itself or using the point system. This last possibility consists of painting points continuously (it forms a straight line), of a size that is also selected in the menu, together with the pattern that is going to be used as the background. Gaps can be filled using a pattern, which can be faded or painted as is.

When the subject of graphics has begun to be discussed, the use of frames has been commented on several occasions. These are treated with special attention: it has a file of 64 different ones, as well as an editor to modify and introduce new ones. The editor is very complete and allows you to carry out all kinds of operations: change the image, invert it, move it from left to right, invert the background, etc.

While working you can change the plot that is being used, even modify or change the model file. When activating this function, a box will appear in the lower right part with all the available ones, and directing the cursor and pressing return will have selected the new one. If you want to paint the pattern without using any function, there is a cursor accessible directly from the menu, which prints it on the screen.

Apart from these graphic forms, there are three more drawing possibilities, mainly oriented towards finance and business. These are the three known normal presentation shapes for balances: saw, bars, and pie. Each one of them is accessed by means of some icons (denomination that the options have when they are presented by means of drawings, as is the case of Stop Press).

The computer designs the different representations of graphics based on data that is entered through the DATA option, unique on the other hand that is recognizable by letters instead of drawings.

Along with the program, a disk with a repertoire of drawings is supplied, which can be used to decorate any page. These can be expanded with more models (background files were sold in England) or with the creation of their own models.

Like any good desktop publishing program, you can also use a scanner to digitize images, which can then be used with the program.

One of the main features of a desktop publishing program is its text editor. Stop Press allows you to use ASCII files that have been previously created with LocoScript or any processor with ASCII output.

As we have already mentioned before, Sto Press has a very complete menu for text processing. This, identified as a letter “a” as a column header, is made up of eight possible options. The first one, defined by a keyboard, allows the introduction of text. This in turn is made up of fourteen other combinations, which affect the font already selected. In this way you can center, justify to the left, to the right, or simply leave the text as it is being written.

The other options affect how the text is placed; that is, if you have an image located in the center of the screen, you can make it adapt to the shape of this image. And finally there are six possible ways to fill in or mark the letters.

The possibility of entering texts, already written in another editor, greatly facilitates the work of page composition. This will allow you to work with a processor like LocoScript, where the user is more used to working, and then bring that text to Stop Press for composition tasks..

Another advantage of this menu is the possibility of changing the size of the selected character, as well as the separation between them. See the different types of letters that the program has, create new styles, etc., complete the options of the text editor.

Stop Press has several more options that complete the entire range of possibilities: zoom, page printing indicating the number of copies, the possibility of leaving the coordinates marked on the screen for greater precision, etc.. 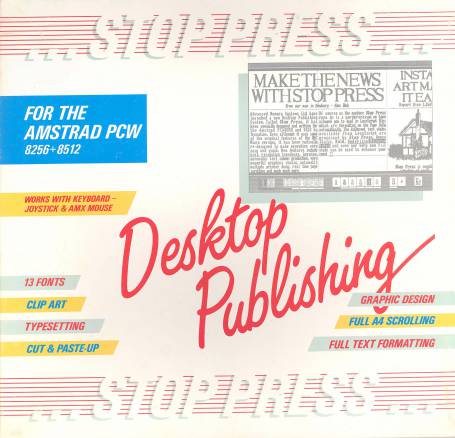 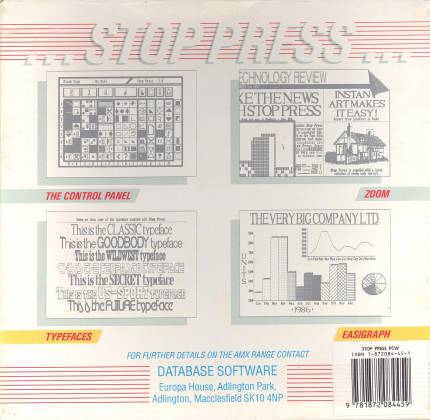 The manual is of the metal ring type and its covers are made of hard cardboard. Its measurements are: Height 21.40 x Width 14.80 cm. 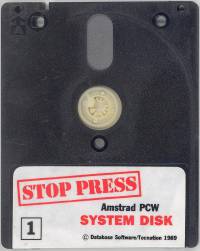 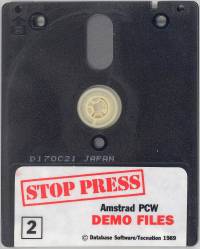 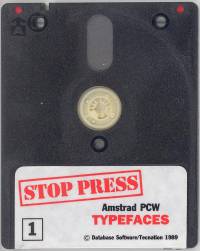 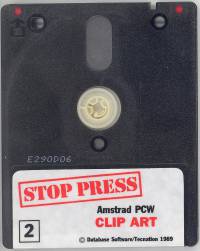 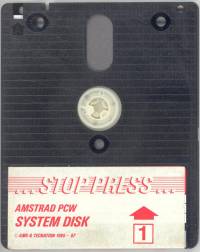 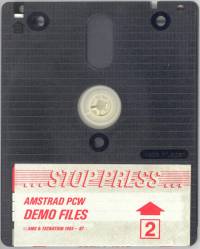 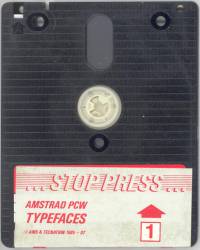 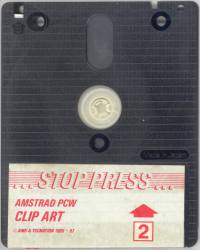 Custom labels to print. Over the years due to their use, the labels are damaged and lose their color and quality. Now we try to adapt the most similar to the extent of our possibilities, the labels so that they can be printed and replaced or for those of you who work with a copy of the program and preserve the original disc. The first column is made up of the original labels for the 3“ records. The second column is the new labels for the 3” records. The third and fourth columns are the new labels for 3.5“ discs. Measurement in 3“ height: 7.00 cm - width: 7.10 cm.

Below we show the small quick reference guide that accompanies the Stop Press, printed in color on thin cardboard, and whose measurements are: Height: 15.50 cm Width: 19.50 cm. 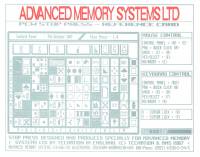 Small guide of tips and suggestions for Stop Press, printed double-sided in black and white on normal paper. Its measurements are: Height: 14.90 cm. Width: 21.00 cm.

Small guide printed on normal paper with the PCW matrixial printer that accompanies the program. Its measurements are: Height: 28.00 cm Width: 21.70 cm. 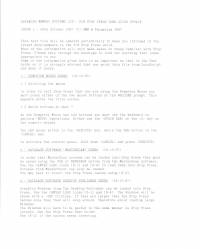 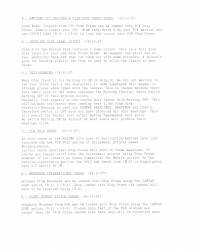 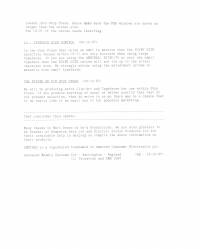 Registration card that accompanies the product, printed on double-sided fine cardboard in black and white, whose measurements are: Height: 17.60 cm Width: 14.40 cm. 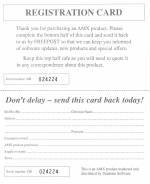 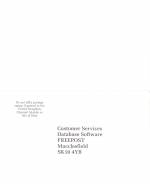 Sheets containing special offers when buying the product, printed in color on normal paper. The first has the measurements: Height: 21.00 cm Width: 14.80 cm and the second Height: 14.40 cm Width: 20.20 cm. 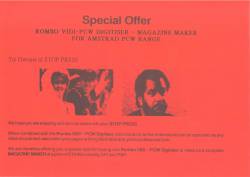 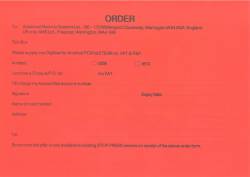 The disc images, have been obtained from the original version of Stop Press, have been recorded and verified.

Below you can download the manual or instructions for the Stop Press program or view it online.