Trace: • mini_office_professional_-_1987_or
Translations of this page: 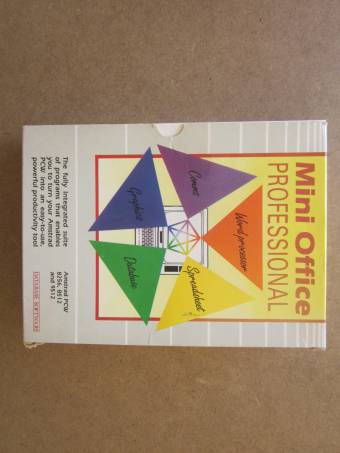 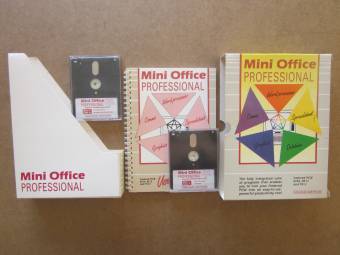 The great possibilities of this integrated package more than justified its success in England. However, we must point out that, unfortunately, the program manipulates the keyboard in a strange way, with the result that all possibility of using eñes, accented vowels is lost and some characters are changed places, making it very difficult to use.

Mini Office consists of five separate programs: Word Processor, Database, Spreadsheet, Graphics, and Communications. Although the programs are independent, and can even be run without going through the main menu, they are designed in such a way that they can exchange data with each other. For example, with the word processor we can carry out a “mailing” from a database file, or we can save a text in ASCII to transmit it with the communications program; Similarly, we can transport data calculated with the Spreadsheet to the Graphs program, and thus better illustrate the results of the Spreadsheet. This is precisely what is meant by the term “Integrated Package”, and in Mini Office it has been achieved in a user-friendly way.

When making a compromise between ease of use and powerful performance, programmers opted for the latter, so using the word processor isn't too easy (don't panic, anyone who can handle LocoScript can use the Mini Office word processor with a little practice). Compared to LocoScript, it has practically the same capabilities, and even some new features that LocoScript does not have, such as alignment to the right of a paragraph, but not to the left (known as “right flag”9, double-height text or reverse video, even a fun option that splits the screen in two and shows us, at the top, the text as we enter it, with the control codes that activate and deactivate things, and at the bottom the text as it is It will remain in the printer (including the various types of letters and/or underlining).

As we mentioned in the introduction, we can easily carry out a “mailing” in conjunction with any database file, specifying in the text which fields we want to appear and where they should be registered.

Other interesting details are the indicators of line and column number, page, total pages and lines in the text; pressing two keys the program also informs us of the total number of words in the text (something that LocoScript does not do). We can even include comments in the text that appears on the screen, but they are not printed on paper.

Regarding the use of the program from the keyboard point of view, many functions are handled with the same keys as in LocoScript (end of line, character forward, character backward, etc.) and others are activated by pressing keys accompanied by of ALT. At first, you have to spend some time consulting the manual every time you want to do something, although with a little practice, the key combinations quickly stick in your memory.

The most striking feature of the database is the way the files are designed. Once the name of a field and the type of information it will contain have been entered, we are taken to an editing screen in which we work as if we had a pencil and a ruler on a piece of paper. We can place the field where we want with the cursors, set its length and height in characters also with the cursors, put a text for each field (or even independent texts not assigned to any field) with different types and sizes of letters. There are five types of data that can be stored: alphanumeric, numeric, dates in USA format (mm/dd/yyyy), dates in UK format (dd/mm/yyyy) and formulas. Numbers can have up to 9 decimal places, and formulas can refer to other fields in the same record.

Once we have a database created and with data in it, we can perform a selective search on any field with a variety of criteria, and the program marks the records that meet the search condition, so that later, from the print menu , we can choose to print all the records or only the marked ones (those that met the search conditions). We can also perform direct mathematical calculations on the marked records (for example, lowering the price of the magazine subscription for those under 20 years of age).

Another interesting feature is that of being able to print labels, in which we can define the height, width and number of labels across the width of the page. Again we have a screen editor to place where we want the fields in the label and we can even choose several different fonts for each field.

The Mini Office spreadsheet has a capacity of 100 rows (numbered 001 to 100) by 122 columns (numbered A to DR). We can define various windows, save the sheet data so that it can be interpreted by the graphics program, and we have a large number of functions to perform calculations: basic mathematical operations, comparisons, logical operations OR, AND, XOR and NOT, WITH text concatenation, trigonometric functions, logarithms and inverse logarithms, conditional statements, arithmetic means, maximum and minimum of a list of values ​​or references, maximum and minimum of a row or a column, etc. Regarding the process of designing the sheet and its structure, the LocoScript cursor movement keys, in combination with the function keys “f1” to “f8”, are used to move around the sheet and to perform the various cell delete, cut, and copy operations.

We can choose from a menu for automatic recalculation or not, and we can even obtain a list of the formulas entered in the spreadsheet. As an outstanding feature, the possibility of choosing between landscape or vertical printing on the printer.

The graphics program allows you to add spectacularity to the work and calculations carried out with this integrated package. We have bar charts, line charts and pie charts. The data can be entered manually or imported from the spreadsheet, and in the bar and line graphs we can represent up to three sets of data at the same time from among the 2 that we can have in memory, which allows comparisons to be made series of results and their evolution. We even have mathematical and trigonometric functions with which to operate on the data.

Pie charts, since the PCW does not represent colors, uses a large number of different frames to differentiate the sectors that represent each data, frames that are also used for representation by the printer. This printed output can also be made horizontal or vertical, the latter being larger.

So that we are not isolated, Mini Office incorporates a communications program in which the simplicity of handling prevails, although on the other hand some features that perhaps should be there are lost, such as, for example, the use of auto-dial and auto-response.

The protocols for four very widespread systems (mainly in England) have been foreseen in the program.

For other systems we can configure, from another menu, the RS232 interface, but not the terminal emulation, in which the widely used ANSI emulation is missing.

In the RS232 configuration we can change the transmission and reception rates (75,300,1200,2400,4800 and 9600), the word length /7 and 8 bits), the parity, the stop bits (1 or 2), the screen emulation (DumbTTY, VT52, and Viewdata, but not ANSI or VT100), and XON/XOFF. For file transfer we have four protocols: ASCII, expanded ASCII, Xmodem and Kermit, missing some others that are increasingly used, such as Wxmodem and Zmodem, which are characterized above all by their greater speed compared to those mentioned.

We also have control over the transmission buffer and we can split the screen in two for conversation mode, and thus be able to prepare a response while we are receiving a message..

The simplicity of handling

In fact, leaving aside the management of the word processor, all the selection of options is carried out with all the comfort through option menus in which we select with the cursor keys and ENTER or by directly pressing the initial of the chosen option.

On disk 2, along with the examples, there are three files aimed at the user with corrections to the manual and new features. One of them explains the compatibility problems that can arise when using the program on a PCW 9512, and that refer only to the limitations imposed by the printer, since in all other features, the program responds just as well as on a PCW 9512. PCW 8256 or 8512.

An excellent program overall, although the communications program is a bit limited, and its quality and flexibility more than justify its success in the UK. Too bad the problem with the keyboard makes it practically useless when it comes to word processing and creates problems with math calculations in the database.

In the following images you can check the original packaging, the actual measurements of the box, for those who want to print the box open.

Here you have the front and back of the original box. 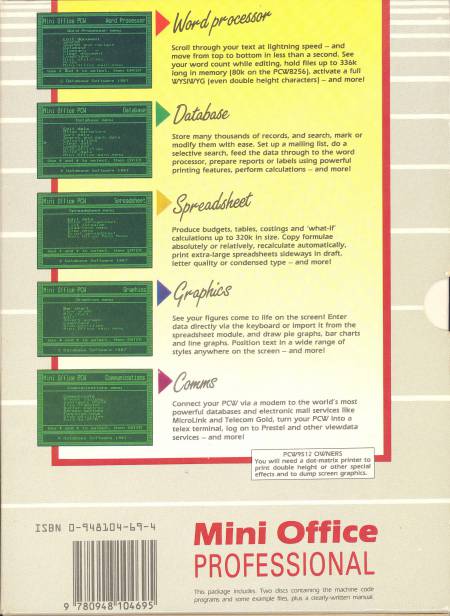 The manual is of the plastic ring type and its covers are made of hard cardboard. Its measurements are: Height 21.00 x Width 15.00 cm. 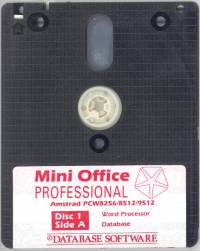 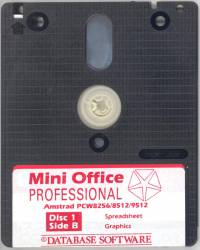 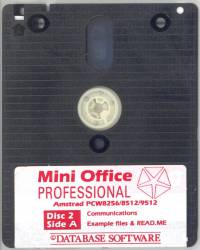 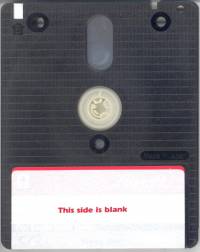 Custom labels to print. Over the years due to their use, the labels are damaged and lose their color and quality. Now we try to adapt the most similar to the extent of our possibilities, the labels so that they can be printed and replaced or for those of you who work with a copy of the program and preserve the original disc. 1 and 2.- Original labels 3 and 4.- Labels for 3“ discs 5, 6 and 7.- Labels for 3.5” discs. Measurement in 3“ height: 7.00 cm - width: 7.10 cm. 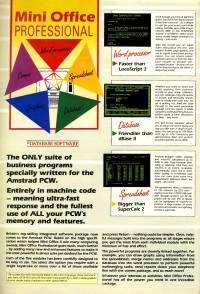 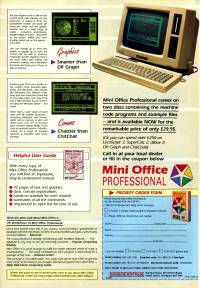 The disc images have been obtained from the original version of Mini Office Professional 1987, have been recorded and verified.

Below you can download the manual of the program Mini Office Professional 1987 or view it online.