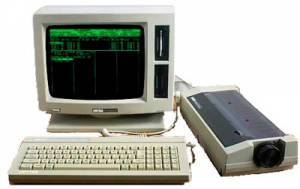 Alan Sugar decides to enhance the PCW 8256 and takes another step into the world of the small management computer. Once the long-awaited companion model of the great CPC 6128 PCW 8256 is on the market, and in view of the success obtained by the latter, the British firm decides to “improve what is present” and launches a model more advanced: the PCW 8512. With it, the main limitation of the “256” is eliminated: its capacity to store programs and data. With a second disk drive and a -refreshing- 256K expansion for the virtual disk. M (internal RAM), it was achieved that, in comparison, the 512 was a device with which one could already work more freely. The possibilities it offered were, naturally, more than those of the smallest of the family, the 256. And it is that there was already memory to be able to work.

Externally, drive off, the 512 hardly differs from the “little” 256. The color is a bit darker, the labels tell us that we are dealing with a 512 and, most importantly, the disk drive, which is located under the the first, right where the 256 has the plate that indicates that the monitor is a green phosphor. For the rest, everything is exactly the same: printer, monitor and keyboard are the same in the 256, which already have more confirmed reliability.

When turning on the unit and loading the system disk, we find more differences: the initial message is appreciably different. Instead of 112 K of internal memory, we find ourselves with 368 K, that is, an additional 256 K. A great surprise; finally we will be able to have complete programs in the virtual disk, among other things, and it is not little. In addition to this, the monitor tells us that we have two units installed. It should be said here that it is possible to have a 256 with a second disk drive, but without internal memory expansion, which would place us halfway between the two models. The difference is remarkable, and the device is a hybrid that I dare not qualify.

In the PCW 512, the first drive is exactly the same as in the 256. The second drive is considerably more powerful. Varies, in this case, the formatting, which is more “dense”, with which it is possible to store a greater amount of information. The disk length is better used. And beware, drive B formats both sides at the same time. No need to panic, then, when the user mistakenly formats (initializes) a disk in B in the same way that he does it in A, that is, first one side and then the other. When it is done like this, it happens that the unit erases the format of the opposite face and, of course, when verifying, it tells us that the first address mark on said face is missing. For the user, the first thing that comes to mind is a possible defect in the unit. And it is, but from the unit that sits in front of the device.

Let's go to the capacities_ when applying the SHOW utility of the operating system to a freshly formatted disk in the second disk drive we have the result that there are 706K free on it (and not 720, which is what the manufacturer tells us). Even so, the difference is not that much, and this already allows a use with much more interesting possibilities than those of the smallest of the PCW family. But everything has its buts; It must be said that, as far as the second unit is concerned, the discs designed for the first, the so-called CF-2, are valid, but not their own. For this second drive, the type of disk has to be called CF2DD, that is, double-sided, but double-density. This should be so because, as we have said, the information, given the formatting, is more condensed, and therefore it is more convenient to use a disc with a more sensitive emulsion. Still, let it be clear that CF-2 disks are valid, even if there is a potential danger of causing problems.

When it comes to compatibility between drives, there is also material to be cut: logically, a disk formatted for “720” K cannot be read in the first drive, designed for a 172 K format. When this blunder is made, the unit emits a kind of grunts, as a sign of protest for the incorrect use. You have to be careful and not make mistakes because it seems to be a bit difficult for a unit to get blocked. And perhaps this is the reason for it. In the other direction, that is, from B to A, we find a whole detail from the manufacturer: a disk from unit A can be read by the second disk unit. This coincidence is very useful, especially because it avoids the hassle of having to constantly change discs.

Disk copying, for example, is considerably more comfortable reading from B and writing to A. And it's also handy when we need some utility from the CP/M and have both M and A (especially A) busy. In short, the combinations are multiple and they are all improvements over the 256. And since we are talking about how the disk drives are, mention that when we have been working with the computer for a while, we notice a heating of the disks that does not seem normal. .

It is with the memory expansion, of 256K, that the device is rounded off- The 368 K free allow us to use the internal memory as if it were another disk, with the enormous advantage that this entails, because, by eliminating the mechanical drive of the head in a floppy drive and the reading process. execution of programs by M and access to data is considerably faster. This internal memory would then come to replace, due to its capacity, unit A, which could be made available for other purposes, such as data storage. And realize if this expansion represents progress at the time that, counting on the 2nd unit, we have a little more than 1 Megabyte to store data.

There are no problems. All programs executable by the 256 are likewise by the 512. What's more, there are many programs originally intended for the 256 that, in anticipation, have routines to take advantage of the 512's 2nd drive. As an example, having in A the program disk and in drive B, the data that arises from the program process. As far as the programs that come with the unit are concerned, there are no differences, except for the fact that a more advanced version of LocoScript, 1.21, is already supplied with the 512 (this version already came with some units of the latest batch of 256 ). The main difference, apart from some simplifications with a view to greater speed of use (1.21 has a window that groups almost all the editing options, so that you do not have to go from window to window) is that the latest version offers the possibility of passing any created file to ASCII, with which it can be interpreted by other devices that work under CP/M.

On the other hand, the DISCKIT utility, having both drives installed, executes other routines that, if you use the same disk in an 8256, do not appear. These routines are, of course, the ones that give us the options to use unit B with the aforementioned program. In the rest of soft no variations have been found.

Any resignation that the user of a 256 could have when seeing that his device was “small” is relieved, without a doubt, with the commercialization of the 512 -on the one hand- and expansion, added to the second unit, on the other.

The PCW 8512 is a reliable device, in addition to being a team with a lot of professional wood, perfectly framing in the field of mid-level management.

Amstrad's path seemed clear. Not to the expansion at the same level, but the ascent of categories gradually. In this ascent, the -short- PCW family is a solid stepping stone. It looks like they thought about it.

The outer packaging is a cardboard box, inside which is protected in white cork to prevent possible knocks, the green phosphor monitor with a 3“ 180Kb drive and another 720Kb drive built in, an impact matrix printer, a keyboard professional, QWERTY type, ñ and accents next to the numeric keyboard, the manuals (volume 1 Losocoscript, CP/M and Logo) and (volume 2 Mallard Basic), two 3” discs containing the Locoscript v1.21 word processor, CP /M, Utilities and Dr.Logo. Some teams gave away a computer program or course for the purchase of the same.