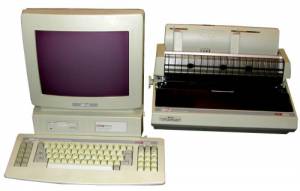 If the 8256 was sold as the amazing machine, we are short of adjectives to name the 9512. We will see the hardware of the PCW 9512 and in depth the software: Locoscript 2 and CP/M.

Externally, this PCW is nothing like the previous ones. The monitor features a new design, with the disk drive located below the screen on the left. To your right we find a site planned for a second drive.

In the first image we can check the back or rear panel of the equipment. Connection for daisy chain printer, parallel port, expansion bus, power button and video sync adjustment. In the second photo, right side of the monitor with the brightness and contrast adjustment. The third photo, the motherboard of the equipment that is added to the design for its simplicity, cleanliness and efficiency. In the fourth image, we appreciate the connector of the new keyboard.

The disks used are still the three-inch ones, although, as with the second unit of the PCW 8512, the double-sided-double-density format is used, with which we have a capacity of 720 Kb per disk without the need to give it the turn.

The 9512's keyboard has changed in form, although it essentially performs the same functions as its predecessors in the PCW range. With a more ergonomic design, we have a space just in front of the keys to rest our hands if we wish. The shape of each key is reminiscent of a PC keyboard, and its touch is better than in previous PCWs. The keyboard has also been provided with two small legs on the back, which allows us, if we wish, to work with the keyboard slightly tilted.

The key layout differs somewhat from the “little brothers”. The cursor movement keys and Locoscript-specific functions are still on the right, although they are now physically separated from the main QWERTY. The grid key has the same function of shortening the appearance of the control character menu after pressing the [+] key, but it also serves to call the spell checker directly.

The general function keys (the “f”) are located on the left, along with CAN, PRINT, ALT, EXTRA, and the [+] and [—] keys. Perhaps the least fortunate is the situation of ALT, so necessary in CP/M, and whose access is a bit inconvenient.

Although it may be a bit of an exaggeration, a daisy chain printer plus the rest of the computer and software is a real bargain. Of course, continuing with the philosophy of the previous AMSTRAD PCWs, the printer is not usable without the PCW, since it lacks the control logic: it is only the mechanism. If we talk about a super printer, it is because of its print quality, like any daisy chain printer. In addition, the control software allows four types of characters to be obtained with a daisy chain: normal, black, underlined and black-underlined. The daisy that is supplied provides Castilian characters of the Pica-10 type, and is of the so-called “wide car” (13 inches). Both Locoscript and CP/M allow us to inform the printer's control software of the paper we are using.

In addition to the aforementioned situation of the ALT key, we can mention the fact that the monitor is integral with the central unit, which makes it difficult to orient it. However, this discomfort is offset by the fact that the video tube is treated to prevent reflections, so that the visibility of the characters in unfavorable lighting environments improves significantly compared to the 8256 and 8512.

Otherwise technical memory characteristics are similar to those of the PCW 8512: 512K RAM providing a 368K M disk. Printer speed is 20 characters per second, slow compared to dot matrix of the 8256 in low quality, but not so much if we compare it with the dot matrix in high quality, and you have to take into account the quality of the writing with the daisy chain printer.

Another advantage of this machine is that it incorporates a Centronics parallel interface from the factory, which allows us to connect a matrix printer if we wish, either for reasons of speed or to make graphics. In both CP/M and Locoscript we can choose to use the daisy chain printer or redirect printing to the parallel port.

Let's now talk about the software part, whose main similarity with its smaller brothers, the PCW 8256 and PCW 8512, lies in the fact that it is supplied with the CP/M Plus operating system (including the BASIC Mallard and DR LOGO languages) and the processor of Locoscript texts. And that's where the similarities end, since the CP/M incorporates some new commands to control the daisy chain printer and to receive files from a disk from the previous PCWs, and the word processor is a new version (number 2) with numerous and noticeable improvements.

Naturally, the CP/M Plus of the 9512 is compatible with that of the 8256 and 8512. However, there are several differences in the BIOS, which should not affect the user, but should affect the programmer. We can cite as the most important the different format used by the disks (double-sided-double density) and the hardware access to the keyboard, which can cause problems if you try to access it directly in machine code instead of using BDOS or BIOS. . In fact, programs have been detected that do work on the PCW 8256 and 8512, and on the 9512 it loads and runs normally, but does not recognize keystrokes.

Regarding the new commands, these are:

Under the CP/M operating mode, the PRINT key gives us access to the printer status line, but unlike previous PCWs, this status line is triple, and we can see any of the three by pressing the keys cursor up and cursor down. With this we have a lot of information and control over the status of the printer: we can choose between Daisy or Matrix; informs us of the status (ACTIVE, ONLINE, OFFLINE, BAR RAISED, COVER RAISED, WAITING FOR PAPER, OUT OF PAPER, NOT CONNECTED); informs us of the line in which it is located; we can advance a line, advance a page, set the impression between low, medium or high; we can choose between fabric tape, single-pass or multi-pass; we can initialize the printer, choose between continuous paper and single sheets; we can set the paper length in number of lines, the top and bottom margins; we can inhibit or activate the paper end sensor, choose between four types of daisy chain; we can change the international character set on the dot matrix printer; we can choose line pitch and character pitch; we can turn automatic line feed on or off, and turn hexadecimal print mode on or off. And all this with just the [+] and [-] keys!

The word processor presents notable changes, in addition to the headaches that the new keyboard configuration can give to those who are used to a PCW 8256/8512. Some options that are accessed from the function keyboard (the “f” keys) are moved, and in general the paths to access many actions have changed, also due to the addition of new functions. It should also be noted that Locomail and Locospell, the standard document generator or “mailing” and the syntax corrector are perfectly integrated.

Pressing the CHANGE key we will see the word change menu on the screen, which adds to the SEARCH options the decision of whether we want that, when changing the word, the uppercase or lowercase letters are preserved or not. The search by paragraphs, pages or documents is reduced to manual change or automatic change in the 9512.

A very important novelty, especially when the disk is full, is the disk manager during editing, which allows us, among other things, to verify, copy, format and rename disks.

The possibility of seeing the beginning of the phrases that we have in memory is also positively valued, which allows us to know at a glance which one we want to insert.

Regarding the printer, we can choose the printer that we are going to use, the paper that we are going to use, through menus, we can define and memorize different types of paper to our liking. As with Locoscript 1, we have full control of the printer in terms of initialization, line and page feed, etc, and of course it is possible to use a dot matrix printer connected to the Centronics port as long as you have the necessary driver for it. . Three drivers are supplied with the computer, one for the built-in daisy-chain printer, one for a Diablo 630, and one for the Amstrad DMPs. With accented vowels, the DMP 3000 are a problem.

The format system is much more manageable than in Locoscript 1. From the outset, we can give each format a name, which obviously makes it easier to remember the characteristics of each one.

The integration of Locomail and Locospell is complete. We can call the spell checker from the document edition with the press of a key, thus accessing the correction of the word on which the cursor is located. Through the [f7] key we have another access to the spell checker, which allows us to check only the word, from there to the end of the document, the entire document or update the dictionary.

The use of Locomail is achieved through control characters similar to those used to change the font, that is, by pressing the [+] key. We also have a special Locomail minilanguage that, unfortunately, the manual barely explains. Amstrad made this mistake a lot, that of not providing the user with all the information about his computer, especially when it comes to software as interesting as a “mailing” generator.

In conclusion, the PCW 9512 is a computer much more focused on the use of a typewriter, given the improvement in the quality of writing achieved with the daisy chain printer and the profound improvements made in the word processing software. In addition, it is evident that the computer loses part of its capabilities for general use (for example, for graphics), since in many cases it would require us to connect a matrix printer that, although it is easily installable, is not supplied with the computer. Obviously, a machine designed for the office.

The packaging, like the PCW 8256 and 8512 series, remains the same: a cardboard box with a shock-proof cork interior to prevent breakage or damage.

The covers of the manual and some of the content change depending on the country of sale of this model. Here we leave you some images to verify it.