Trace: • odesa
Translations of this page: 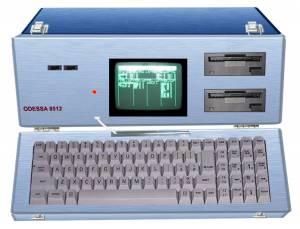 The PCW Odessa was manufactured by the Isenstein company, its address:

How many times do we think about taking our PCW to work, on vacation, etc, to be able to use our word processor? The only solution at the moment was to buy a laptop and link it to the PCW, which was the mission of the Z88. The main problem was the compatibility of LocoScript and CP/M which did not work on other machines.

The great acceptance that the PCW had in Great Britain led the firm Isenstein Computer Systems to bring to market a portable version of this computer as the solution with an alternative, the conversion of a modern PCW.

The Amstrad PCW Odessa, distributed by the Isenstein company, was a custom PCW, basically an 8512 in a case that included a 4” green phosphor CRT monitor, disk and keyboard like the one on the PCW, second drive, ability to connect 5 1/4 and 3 1/2 and four different forms of power, including a battery service capable of powering it for eight hours We say it was a custom PCW, because you could send your own PCW 8256/8512 to be converted or ordered the directly finished product.

Therefore, it was fully compatible with any PCW and included the expansion port. It is not known for sure how many of these were converted and how many were put up for sale, but there could not have been many.

Actually the PCW, had several transformations, but the Odessa was the best known (a PCW rebuilt in a portable type briefcase), and an attempt to create a PCW with the screen inverted to be used in a car, one of the projects more ambitious (there were images of prototypes, but it was never marketed).

The Odessa is effectively a PCW that has been stripped down and repackaged in a briefcase for transportation. Said briefcase was adjusted in size and weight, therefore full. It consisted of a motherboard, two 3“ disk drives (the same ones from the PCW 8512), and a keyboard from a repackaged PCW 8000 series with the same key layout, inserted into the flip cover of the main unit. The drives and the monitor were on top of the main unit The PCW monitor is replaced by a four-inch diagonal, 10 cm, 30-line x 90-character mini-television display It used rechargeable batteries that provided 4 hours of good service, although, as always, in practice the time is shorter.

You couldn't close the lid if the machine was still on, so you wouldn't have to worry about batteries if you accidentally left it on. All the internal components are the same as the PCW, so the same programs could be executed as in the 8000 series, such as LocoScript, CP/M, Protext, Mini Office and Supercalc among others. This saved time, such as having to get home and use a disk in our PCW, modifications or transfer procedures, etc, if we compare all of the above in the situation of using a laptop that does not use CP/M or LocoScript, etc. , having to make the transfer through a cable and communications software. Although all the PCW software was supplied, there were certain incompatibilities with the PCW, especially on the keyboard with part of the software.

The Odessa was sold with or without a printer, this being optional, although nothing prevented the use of the PCW 8256/8512 matrix. Also optional one or two drives (the price being £528 with one and £629 with two drives). Versions with an added parallel/serial interface allowing a modem or daisy chain printer to be connected (would be £70 more). If we wanted a PCW8256 or PCW8512 printer (prices increased by £230 and £310 respectively). Prices varied depending on the configuration we wanted.

Another problem we ran into was that if we supplied our PCW for conversion at Odessa we would lose the Amstrad warranty, so the Isenstein company supplied their own warranty which covered twelve months.

Let us remember that due to its shape and content it was somewhat heavy when it came to being transported.

Here are some real images of high-circulation magazines of the time. Where we can see the PCW Odessa transport case and this one open.