Trace: • pacmania
Translations of this page:

Almost 30 years ago, Namco Ltd, published in November 1987, this formidable coconut-eating game for CPC computers, and now from the hand of our colleague Habi, we get this ported game for our PCW, which returns us to lead to the 8-bit era. It is playable in PCW version 8256, 8512, 9256 and 9512 and runs on its own CP/M Box emulator. According to Habi, “The game has been especially easy to convert from CPC, as internally it is constantly converting the screen from “Spectrum format” to CPC, so it is enough to change one conversion for another. It has corrected the sound when catching the ball fat that allows eating ghosts (in CPC the routine is not ported and writes in the Spectrum ULA, which has its danger.) It has ported the sound for the dk'tronics interface and you can also play with its joystick interface. It is a bit slow (something that already happened in the CPC version), I have put a menu at startup that allows us to choose how many frames we want to dump; the lower the number, the faster but less smooth. Personally, I prefer 100%”.

One of the novelties that the game incorporates in this ported version is a small menu where you can choose the frames of the game to suit each player and the adaptation of sound to the DK'Tronics interface that will surprise us with a spectacular quality, something almost impossible in many of the games that were created at the time for the PCW.

This game stood out from previous versions of pac-man, with the introduction of jumping over ghosts, its isometric view, and its 3-D stage.

The story of Pac-Man is undoubtedly one of the most exciting, perhaps it was one of the first machines with half-decent graphics that appeared in bars. The multitude of people who played in them made the word “eat-coconuts” known and implanted in our vocabulary as if it were any other.

The first generation of Pac-Man was undoubtedly the most exciting, in this we had to defeat our tireless pursuers, eating all the points of each maze. Of course, we had our little help, the one with the flashing dots, which by eating them made the enemy flee; but this had its difficulty and that is that as we went through levels the speed of the enemy grew, while ours remained the same.

The aforementioned bug made a second generation of Pac-Man appear, which only varied from the first in that they had an acceleration button in our Pac-man, which made the game more balanced in forces.

and so time has passed, to this day, computers have changed, and tastes too, Pac-Man is still used but now in a second step. In the games the three dimensions are already known and the recreational machines are full of puppets, karateka, cars. airplanes, etc., all of them well done, with great sound effects (and nobody remembers the old Pac-man anymore).

But one fine day they bring a new machine to the arcade, with the impatience of the attendees. they take it out, assembled and ready to play. People are shocked by the carcass, and rumors are heard “but if it's a com- coconuts”, the employee hits the power switch and something surprising happens: a Pac-Man appears to greet us and invites us to insert a coin. A regular at the machines and connoisseur of the old Pac-Man wants to brag to his friends. He inserts the coin and the game starts. start. The decoration comes out and here is the surprise. It is made in three dimensions, with wonderful graphics, a stupendous speed and music that is somewhat chilling. The assiduous player cannot believe his eyes, how much similarity and how much difference to the same The fact is that it does not go beyond the first level.

Clever software companies soon jump into the long-awaited conversion and quickly jump into the exclusive. This time it is Grandslam that will be in charge of making the conversion for the computers. It starts with a very good conversion for large computers, and then moves on to the small ones (8 byte machines), here is our Spectrum, Amstrad, and so on… The game consists of seven levels divided into one for beginners, two medium , two high and two overreached. Pac-man this time is in a city and wants to go through it.

Level one (novices): Pac-man comes out willing to do anything, and his enemies are still asleep, which makes him wander the streets along the sidewalks, quietly, picking up his favorite food (pebbles).

Levels Two and Three (Mid-Grade Players): This time Pac-man hits the park. Here his enemies are already somewhat more alert, and they are hot on his heels, but not without great difficulties, which means that he can continue eating.

Levels four and five (good players): him Now he wants to go to the theater and he does it from the park, but beware, his enemies are no longer dumb and make big jumps; Powerful enough to hunt us down.

Levels six and seven (gifted players): Pac-man leaves the theater and heads to the great iron jungle (city), of course, eating his much needed pebbles. Here all of his enemies are extremely dangerous.

With a good use of the miracle pills, a bit of skill, good reflexes, many hours of playing, great practice in the jumps and time to play, I reckon that you will be able to finish this last level; the surprises are only for the winners!

This game is a good conversion of the machine. It is made in mode 1 using colors very well, which makes the game attractive. Speed is essential in a coconut eater and here they have managed to give it to them through the frames menu. 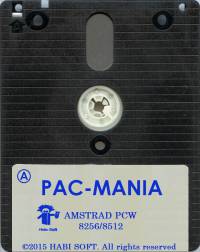 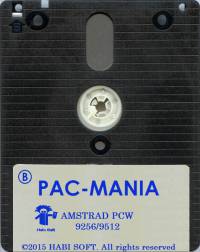 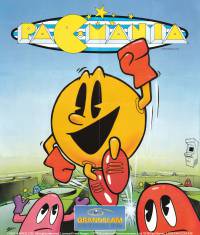 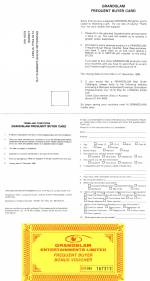