Trace: • histoire_dor
Translations of this page:

Get ready for the gold rush. This adventure game takes you through all the adventures that American settlers went through during the Wild West era.

Not less than 50 ° C in the shade! And it's been two very hard days! Not the smallest oasis in sight … Sand, always sand, more sand! My horse no longer has a single shoe worthy of the name; As for me, my taste buds don't even have the strength to order a drink! …

But why did I give in to the temptation awakened in me by the good Ricky's telegram? … Anyway, who would resist that: “New Hole City is the vein”; it's really the perfect opportunity to be able to “take it easy” for the rest of your life … Ah, finally a city on the horizon! I started to wonder if this was not just an illusion. But who are these horrible people with sinister mines? Before I could make the gesture of drawing, the four of them are on me … “The bag or the life, Coco!” … Having chosen the bag, they still have the “goodness” that they leave me a dollar .

My first visit to this city is to the salon (of course!); I have nothing to drink but I can have the luck of the other. They even have a reserve of tar and feathers always ready to use … so watch out and watch out for mishaps!

I will not tell you in more detail my personal episode of the conquest of the West; that would run the risk of distorting yours. But you should know that the graphic quality is remarkable, the vocabulary is flexible to use and all the ingredients of a western are there. As for making a good western, the cards are in your hands and I wish you that … for all the gold in the world!

This novel game presented by the French publisher Cobra Soft, known for its CPC softs, presents Histoire d'Or, a role-playing and text adventure game in the American Wild West, with a French-speaking analyzer and an authentic western where Players will find all the ingredients of the blockbusters of the classic West … Desert, ghost town, cactus forest, ranches, railroad, living room, etc … make this decoration a success. The graphics used span the entire width of the screen as in cinemascope. The characters have been very worked and we will find all the figures of the West: the sheriff, the cowboys, the Indians, the cavalry, the old miner, the girls of the tavern and of course, the inevitable undertaker who will have a lot of work before the player find old ben's treasure …

Christian Descombes, the graphic designer used the Electric Studio stylus to create the drawings while the script was written by Jacky Adolphe and transformed it into a Gilles Bertin program and Bertrand Brocard led and developed the game. The game is so rich in terms of graphics and scenery that players will find their hours of fun.

Some distinctive features of “Histoire d'Or” partly explain the fact that it was positioned as one of the very few graphics software products for the Amstrad PCW platform (and Cobra Soft's first and last experience of this type), which was in fact a “smart” typewriter, which, while running on the popular CP / M operating system, was viewed as nothing more than a boastful monochrome monitor. However, the game appeared on the Amstrad CPC which was more familiar; In addition, in the last three decades since its inception, there have been persistent rumors in the community of fans of old games about the existence of a version for the IBM PC, which were not confirmed by anything, save for a couple of not very friendly minis. - reviews in the press of profiles in 1987 … The same author of Histoire d'Or, could not find this edition in his archive; however, in 2019 R. Kh. he discovered it and came back to life.

Interestingly, with “Histoire d'Or” no user manual was provided: both the plot and the local interface features are explained at the beginning of the game. Regarding the first, it is very simple: our invisible protagonist (since the action takes place in a first person perspective) arrives in a small town in the Far West with the suspicious name of New Hole City (with a population of 463 people and 58 coyotes), having received a telegram from his old friend Ricky, announcing in a few words that this very place is a real gold mine … Apparently it was bad enough for our hero to be home, as he decided to respond to such unintelligible call and, having endured two days riding through the arid desert, he got - dirty, tired, dying of thirst and with a lonely dollar in his pocket - in this hole forgotten by all, where no one expects or receives him … It seems that Rikki himself has already moved out of here, and we will have to search for this same gold alone.

The main screen of the game is horizontally divided into three approximately equal parts: at the top we see the image of the current location; in the middle there is an open window for entering commands and displaying text messages; At the bottom, there are some useful objects. First, a compass that indicates the direction of our gaze (from the left; you can simply move here with the arrow keys: “up” will mean “move a screen north”, “south”, “east” and “ West”). Secondly, a simple inventory of the protagonist, visible in the center: a wallet with an indication of the amount of cash it contains, a figure of a horse, etc., and most importantly - images of a rifle and a revolver with detailed cartridges.

There are twenty-six commands for handwriting, these are verbs, of which the first thing to do is use NO, “warning”, which displays detailed help in the local interface (along with a list of those keywords). For an analyzer control of this type, it is enough to enter the first two letters of the desired action (the rest of the program will think about it and add it on its own). But the names of objects, people, and creatures, which should complement and clarify the meaning of many verbal commands, should be given in their entirety; There are only 55 of them, and all of them are also registered in the aforementioned help screen: sheriff, hotel, bank, mule, etc. (After typing the command, you must confirm it with “enter”, while the space between the verb and the noun is automatically replaced). Due to its American setting, and without the most extensive vocabulary, in principle, even not very great experts in the language can handle the game. Of course, the interface is also difficult to call particularly smart: in response to any word we type that is not included in the official “26 + 55” list, the program will return only a puzzled “???” (and what is included in it, but is not suitable for the situation, will simply be ignored).

Among other things, “Notice” will also present us portraits of sixteen local characters that can be found in New Hole City and its surroundings: a doctor, a funeral home, a sheriff, an innkeeper, cowboys and Indians, in general, all those who are I could hope to see in a place like this. Keep in mind that each step in the game is fraught with dangers, and even the instant death of the protagonist: strangely enough, but encountering not only redskins, but also cacti, bison, snakes … In some cases, we may have to shoot, and as already mentioned above (of course, subject to the availability of cartridges), but in others a lethal or simply unpleasant result is inevitable. For example, when visiting the main street of the city, you should not be fooled by invited images of the lounge, bank and other establishments at the top of the screen: pressing the up arrow will take us to a completely different location, where invisible intruders they will rob us right there, without asking unnecessary questions … To visit these places, you must type the command: for example, “in (that is, between) blacksmith” or “in bank” (of course, without external quotes). In general, it is almost impossible to do without drawing a map of the game world by hand.

For those for whom the parser control features, the appearance is not the most familiar and standard of danger-filled RPGs and adventures in the guise of an “interactive adventure” does not seem to scare them at all, but just add spices and spicy on the plate, definitely a must try at “Histoire d'Or”. 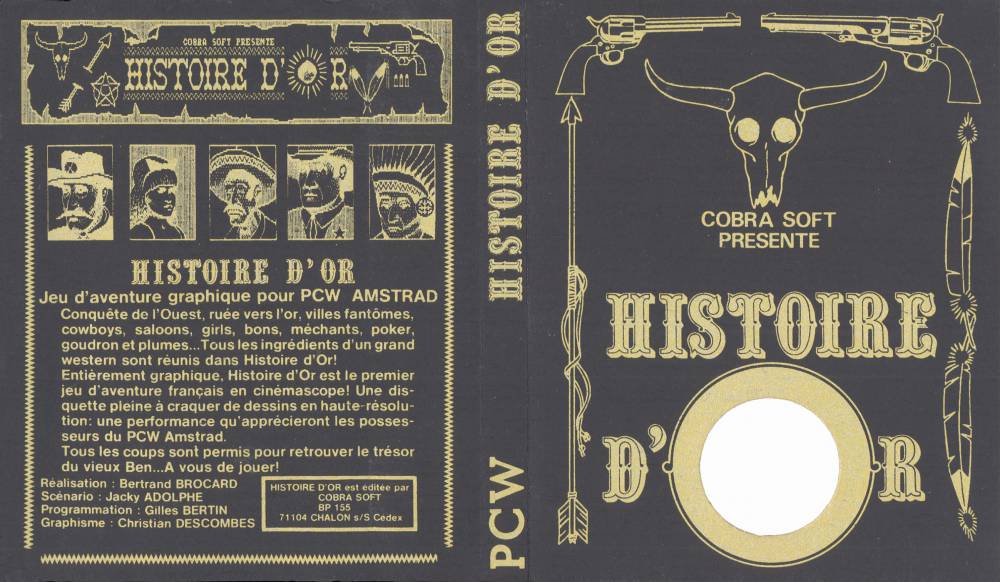 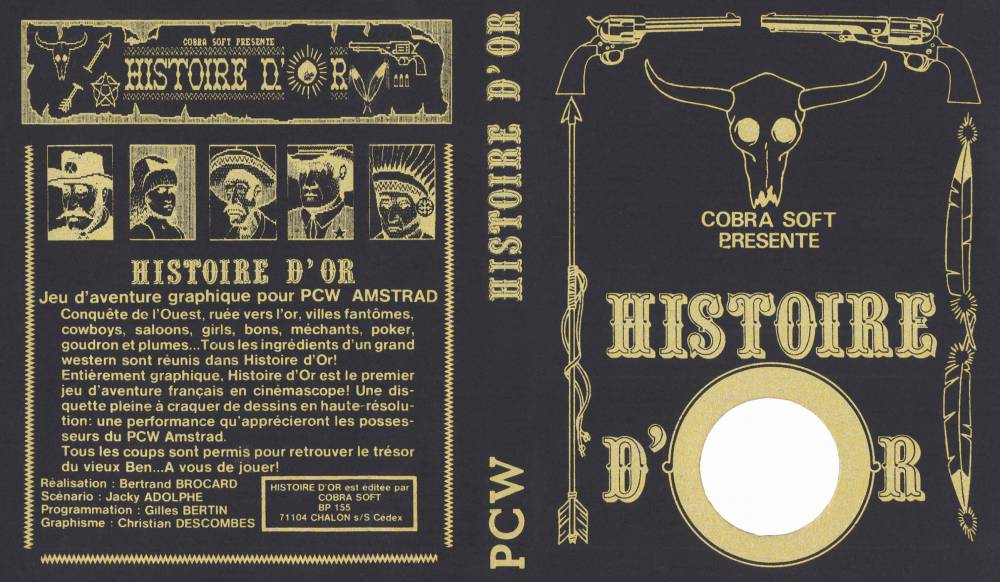 It is not accompanied by a printed manual. This is found inside the game disc under the name “Notice.bas”. 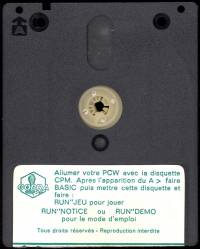 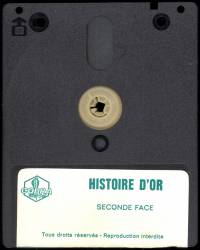 Custom labels to print. Over the years, due to their use, the labels are damaged and lose their color and quality. Now we try to adapt the most similar in the measure of our possibilities, the labels so that they can be printed and replaced or for those who work with a copy of the program and preserve the original disc. Measurement in 3 “height: 7.00 cm - width: 7.10 cm. The first image corresponds to the original label of the game, the second is the same modified label to be able to replace the broken one.

Then we leave you with an original sketch of the game. 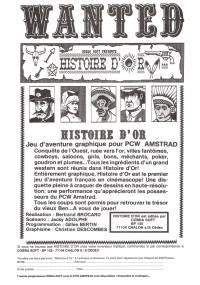 The disk images, have been obtained from the original version of Historie d'Or, have been recorded and verified.