Trace: • halls_of_the_things
Translations of this page:

HALLS OF THE THINGS 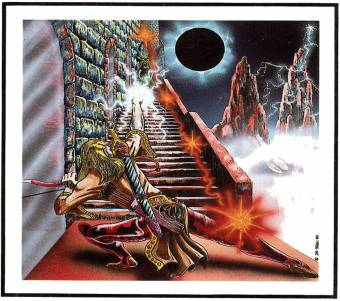 This simple but complicated game was launched for the Amstrad PCW's in 1985, after the PCW's 8256 appeared on the market, developed by Design Design. Due to the simplicity and the year of development, we can verify that it was one of the first games that appeared on the PCW market, although no record of its launch has been obtained, but it has been verified by one of its developers Simon Brattel .

Thanks to our colleague Roberto, better known as (Robcfg), who located the source code on the Design Design website. He himself contacted Simon Brattel to authorize its publication, which was very positive since he confirmed it in exchange for us to inform him as soon as the game saw the light, surely to see it in operation thirty years later. and upload it to your own website of the successful company.

Next, our colleague Javier, better known in the world of PCWs and other computers by (Habisoft), creator of the CP / M box emulator and development of peripherals and adaptation of games to PCW such as the famous Abbey of crime among others, gets down to work and after a long time of headaches and study of the source code, ends up assembling the game and putting it into operation.

As always, it is thanks to Habi and Robcfg, that thirty years later we PCW fans can revive a project that never came out on the market, which we will now enjoy on our machines or on their own CP / M box emulator.

Once the operation of the same was achieved, our next step was to review the existing covers and discs of the game in other versions online, with which Jesús (Jevicac), adapted the current cover and the disc label so that we can suppose how it would have been in the PCW version. Which you can see and download on this page in case you want to preserve the game.

After putting all of us, our grain of sand and our biggest thanks to Simon Brattel, we leave you with the game so you can enjoy it.

Halls of the things, is a maze game, with tiny graphics, our man “the magician” having a height of one centimeter. It's one of those games that looks nasty, pathetic, and almost impossible to play. As we play, it will become a fun game for the amount of things we can do and quite addictive. But the worst of it, the handling of the keyboard due to the number of functions it has, there where we must demonstrate our agility with our fingers, which we will improve as we advance. Like some other game designed for the PCW's, this one lacks sound. It's probably going to take us weeks and weeks before we get near the end of the game.

The objective of the game is to make our way through the multilevel maze and find the seven hidden rings in the seven highest levels of the tower of death, each level being a complex maze of corridors and rooms and killing things as we go. Our magician, the hero of our story, is armed with a sword, a bow with arrows, fireballs and lightning bolts.

Once we have the seven rings, we can get out of the labyrinth, but first, we must find the magic key that is hidden in the underground dungeons, which opens the drawbridge so that we can escape with it. To prevent our progress, we will be attacked by “things”, but fortunately, we will be well armed with the objects that we collect along the way to help us in our search.

Different objects and magic potions, these limited ones, that will help us to recover the forces lost in the combat with the dangerous inhabitants of the corridors and rooms, do not forget that everything that moves goes for you. Some bottles that contain the potions will be full and others half empty that will make it more difficult for us to advance through the long mazes.

Each level, except the dungeon, is a huge maze, with hundreds of rooms and corridors. Many of the rooms are closed by doors that can be opened or closed by our magician or something else. If we are lucky we can find the elixir bottles on the ground, but unfortunately things also have an affinity for them. The elixir will raise our level of magic and allow us to shoot more lightning bolts and fireballs, as well as heal ourselves. The treasure can also be found, it can be collected and thus add to our score. But beware, things can disguise themselves as treasures and suddenly attack us. The only way to check is to try shooting them.

We can execute all the typical actions of this type of game such as: picking up objects, dropping them, opening and closing doors and corridors, shooting, casting spells, healing our wounds, etc. At any time during the game the action can be paused, revealing a status screen. This details the number of rings found, dead things and arrows remaining, and the current status of the magic ability and wounds. Injuries sustained can be healed, but this consumes magic, which is only replenished by collecting potions scattered throughout the labyrinths. If the level of the wounds reaches 100%, the game ends.

The simplicity of the graphics makes us think of a program belonging to the first generation of computer games, old-fashioned but entertaining.

The game had a second part called “Return of the Things”, but it did not see the light for our PCW's, however it was present for other machines of the time. A pity that these types of games, although not of good graphic quality, but very entertaining, did not continue advancing at the time.

Halls of the Things, it seems to be a horrible game, but it really disguises an exciting and challenging game. The presentation is excellent - the range of controls and weapons available is superb, and the ability to redefine most of the game's parameters is suitable for all skill levels.

It's pretty disconcerting at first, partly due to the minimal instructions, but once you get used to the keyboard, you can enjoy long and rewarding games. Sonically, it's nothing special, but the Spartan effects that do exist add a small amount to the atmosphere.

Collecting objects and destroying monsters is a simple format, but achieving the goal is not easy: the design of the random dungeon each time you play the game guarantees its probability. Highly recommended for everyone who wants some classic action.

There is a small vision of the game that involves intense emotion. The idea of ​​the game is based on the traditional setting of “Dungeons and Dragons Adventure”.

We assume that the lack of sound (PCW beep) is due to the immense amount of time that the computer would have to spend processing it, which slows down the game to an unacceptable level.

The graphics and the absence of sound make this game at first impression a not very entertaining game, easy to appreciate, but as soon as we get used to the wide range of keyboard controls, the action is frenetic and exciting: it becomes difficult to let.

Halls of the Things, is an exciting and innovative game for the time, which works with extraordinary speed, smooth action and graphic quality.

Back of the cover containing the continuation of the manual. Its measurements are: Height 13.20 x Width 31.60 cm.

Custom label to print. Over the years, due to their use, the labels are damaged and lose their color and quality. Now we try to adapt the most similar in the measure of our possibilities, the labels so that they can be printed and replaced or for those who work with a copy of the program and preserve the original disc. Measurement in 3 “height: 7.00 cm - width: 7.10 cm. 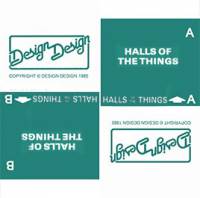 The disk image has been obtained from the original version of the Halls of the Things source code, assembled by our colleague HabiSoft.

Below you can download the Halls of the Things game manual or view it online.