Trace: • grand_slam_tenis_es
Translations of this page:

When a game dedicated to sports appears on the market, it tends to be quite popular with users. Several sports have already passed through the PCW monitor, this time it was tennis and its success will not be less. OMK released this game for the PCW, although it is not up to the best available for other machines, it does offer magnificent graphics and a more than acceptable presentation.

After putting the disc in the computer, two self-advertising screens appear with a very original presentation system, but quite slow, which can give us the impression that they have made a mistake or have hit us the great change, but do not worry, it What happens is that before the game appears, two advertising screens for other programs are presented. After the presentation, the menu with the available options appears, which allow you to select the player, see the world circuits, players and determine the tournament that we will play among other things, which will determine who we will face.

The game adopts a zenith perspective (that is, as if a camera were located just above the court) and the two players, the referee and the two ball collectors appear on the field. The program allows you to control the power of the serve and regulate the angle of the racket and the force with which the ball is hit. We will also have a scoreboard that will give us the score.

The graphics are good and have an appropriate movement, although from the perspective with which we see the game, it does not have much merit. There is a detail of good taste, which is that the ball collectors are in charge of carrying out their work instead of remaining as a mere decorative element. Unfortunately, this noticeably slows down game development.

The level of play of our contestant is not too high, limiting himself to returning the ball to the opposite side from which we are. Because of this, the trick to winning is not getting too close to the net and always staying in the center of the court.

The biggest defect that can be attributed to this game is the poor layout of the controls, since in addition to the cursors it is necessary to control the spacer, one (any) of the two SHIFT keys and the + and - keys, located at the sides of the space bar. This makes it impossible to save and load games, as the matches are played in three sets of six games, which can make the game quite long. We also miss being able to face another player instead of just the machine.

Otherwise, the game has more than enough quality to deserve a prominent place in the PCW library of programs, with clear and convincing graphics, fast movements (not excessively) and immediate keyboard response.

Clear graphics are the highlight of this game, which on the other hand is somewhat weak in other respects. Movement is appropriate for the players and slow for the ball boys. The sound consists of a beep each time the ball hits the ground or a racket, and the splash screen keeps the country flags in motion, causing a slow keyboard response.

Here you have the front part of the original cover which is of the triptych type.

The manual is printed on glossy black and white paper, behind the cover of the game, which is triptych type. Its measurements are: Width 26.20 cm x Height 9.90 cm. 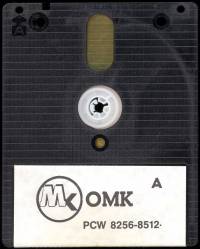 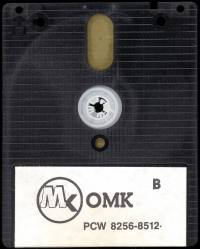 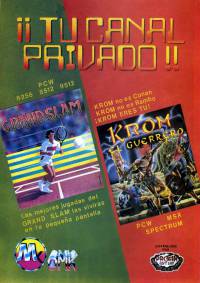 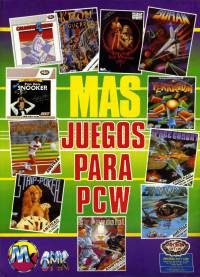 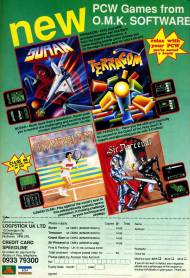 The disc images, have been obtained from the original version of Grand Slam, have been recorded and verified.

Below you can download the Grand Slam game manual or view it online.