Trace: • classic_collection_2
Translations of this page:

We can now face the second part of Microvalue's Classic Collections. This one, like the first one, contains three games: CAVERNS, CLIMB-IT and SKIING.

When loading the program, a general menu appears in which we are offered the option of choosing one of them, but if at any time, once we have designated which one we want, we want to go to any of the other two, we will have to repeat the entire operation from the beginning since the pack does not include the possibility of returning to the general menu.

Caverns is the first of the three programs. In this one, you go inside a ship that is avoiding mountains, not only must you gain control by dodging the steep peaks but you must also resist the attack of a bunch of enemies coming your way. Ships from other planets, feline masks, will attack you at the same time. etc … In addition, between the mountain peaks are located missiles that will meet you as soon as you fly over them.

Once you have started playing you can no longer stop, you will be continuously on the move. At most you can go back, rise and fall to avoid enemy ships and missiles, but never stop. Anyway you not only have to limit yourself to dodging them since you can also shoot them. Still it is not convenient to trust the shot, most of the time it is too slow.

As we progress, the game becomes more difficult, or rather, less easy, the mountains between which we must pass are narrowing more and more, not having as much margin as at the beginning to avoid the “stumbles”. In Caverns you have 5 lives. The graphics are just and necessary and also the sea of ​​simple. It is a very simple program and although there is no diversity of graphics or plot, it is entertaining, at least it lets you play.

Clímb-It the second program in this pack is the computerized version of King-Kong. Or more than computerized, we could say informalized. And as you may have deduced, in this short space of time, your mission is to rescue your girl who is a prisoner of the gigantic King Kong.

On the first screen, the main stage are some ramps at the top of which are the gorilla and the girl and at the bottom you. Once the game has started you must go up at full speed towards them avoiding the barrels that send you rolling down the Kíng Kong ramps. The best way to do this is to stand on the ledge corners of the stairs and wait for it to pass. You must avoid falling over the edges or you will lose a life. This first screen is the most surmountable of all, since things will get more and more complicated for you, also here you have the advantage that at the beginning you have a barrel of oil that in case of need can perfectly serve as a shield.

Later, once you reach the final ramp, you will have to climb a small ladder towards your girlfriend. In this way you will automatically go to the second screen.

The movements that you have are the currents, that is, moving forward or backward, up, down and jump, while the use of the latter almost always means the loss of a life, it almost never works.

On the second screen, the scenario does not change, but what is different is the material that your sentimental opponent sends you: huge barrels. The downside of these objects is that instead of rolling down the ramps, they descend like feathers going straight towards you and chasing you at all costs. The best thing you can do to start well, we do not assure you that to finish in the same way, is to leave very quickly and reach the first ramp, here try to avoid them. On the last and last ramp it is already very difficult for anyone to reach you. In this second screen you no longer have a vat of oil or anything that can serve as a shield. As soon as you get closer to your girlfriend, you will go to the third screen.

On the third screen, the scenario changes with respect to the previous two, here there are no longer ramps but a kind of floors that are linked by stairs. You must go up them trying not to approach and that the fireballs that are in each of the three existing levels do not approach you, in the room are King-Kong and the girl. In this phase, the bride remover does not send you anything …. Remember that this pack program only has 3 lives.

Skiing is the third program contained in the Classic Collection II pack. As you can imagine, your mission will be to make a descent in the shortest possible time and without leaving the middle of the flags located along the route. Your objective is to avoid the flags that you have placed along the track.

As you go past screens the flags are positioned so that there is less space between them. Then, as it progresses, the matter becomes more complicated. Regarding the rest, there are not many more things to comment, the screen does not change except for the situation of these flags.

Given the capabilities of the machine in terms of graphics and sound, certain shortcomings can be understood, but we find a pack with very big defects. For example, Ski-ing is perhaps the most disappointing of the three, what could be an exciting descent at full speed remains in a rough scrolling of the screen more typical of basic beginner programs than of a commercialized package.

If it weren't for the desperate need for PCW software, programs like these would have no place on the market. The quality of the graphics and sounds reach the minimum, while the response of the keyboard and the events of the games themselves recall that of the prehistory of this whole world, although after all they are three old glories for the collection.

Here you have the original cover. 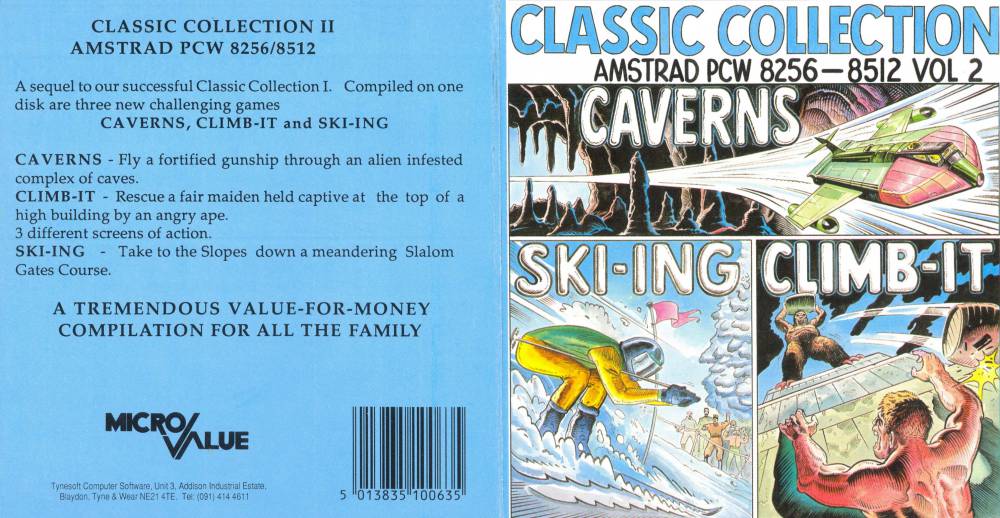 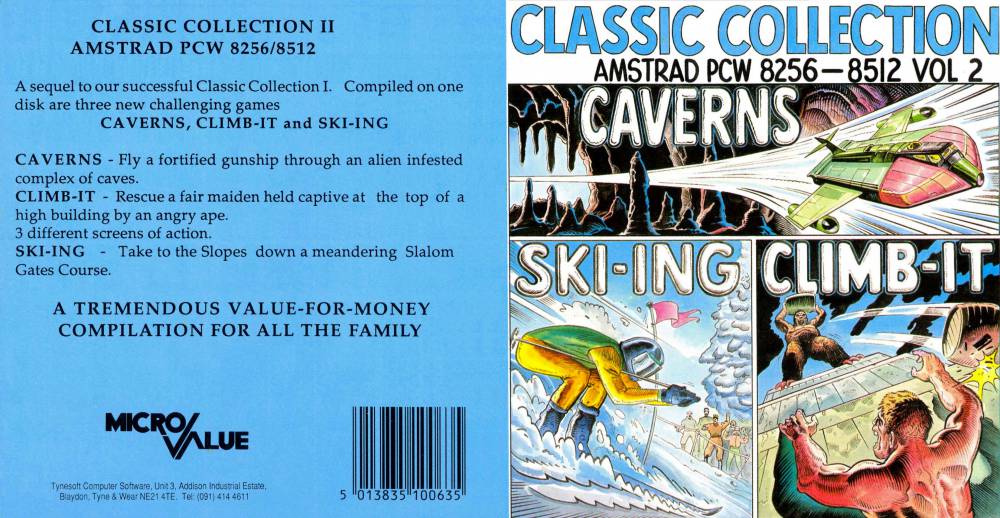 Below is the manual printed on the back of the faceplate. Its measurements are: Height 14.50 x Width 28.00 cm the sheet. 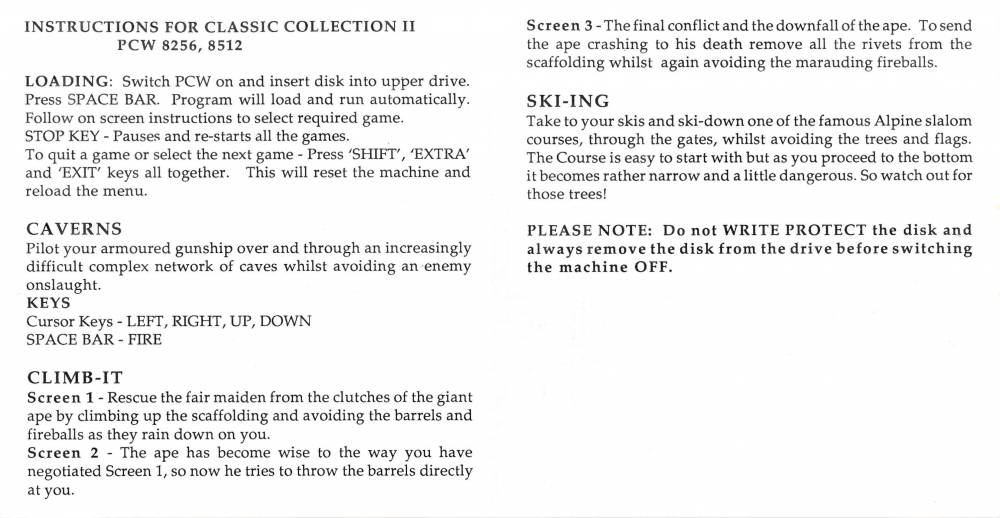 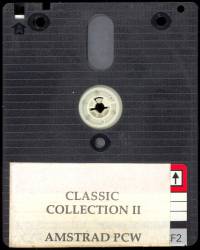 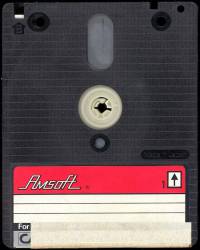 Custom labels to print. Over the years due to its use, the labels are spoiled and lose their color and quality. Now we try to adapt the most similar in the measure of our possibilities, the labels so that they can be printed and replaced or for those who work with a copy of the program and preserve the original disc. Measurement in 3 “height: 7.00 cm - width: 7.10 cm. The first image corresponds to the original label of the game, the second is the same modified label to be able to replace the broken one and the third image is for 3.5 “discs.

The disc images, obtained from the original version of Classic Collection II, have been recorded and verified.