Trace: • yes_chancellor
Translations of this page:

Do you remember the disturbed general elections back in June? Did you ever think you could do things better than the government? And how all the political parties claimed that their economic policy was the only way to get the country going again? Would they rule the country again? Can you stay in power long enough? And a vital nobility?

Well, Topologyka presents us with the title of its game Yes Chancellor!. It is a simplified but realistic economic simulation program of the country's economy, instructive and fun, easy to use, aimed primarily at the educational market and ideal for economics classes. Enter your annual budgets (tax rates, government spending, etc.) and watch your popularity plummet and the economy crash. It is a complex model of the economy, of the flow and value of democratic politics: unemployment, strikes, opinion polls, financial crises, inflation, taxes. The simulation follows general economic laws and all results are logically linked to your decisions.

It's about an alleged visit from Caspar Weinberger on the US Defense Budget who says: “a billion here, a billion there, that adds up, you know…” With the Yes Chancellor game, you have the opportunity to play with the millions of the country.; You take on the role of the number 1 man to guide the nation through a succession of budgets, deciding how much to spend on defense, law and order, education, and welfare. You also have to decide each year, the level of taxes, set the bank interest rate and deal with unions who make ridiculous wage claims and are quite prone to strike action if you don't give them enough. The goal of the simulation is to stay in power for the duration of the terms, which is often not so much a question of fiscal policy as simply holding on.

Our term begins after an election, the economy looks for reason… Your task is to keep things going for five years. You have a Gross Domestic Product (GDP) of £1 billion and no pennies. And it depends on…

The PCW analyzes the consequences of the figures that we decide and we rearrange things with a few random numbers. The year goes by unnervingly enough in the blink of an eye, and the results of your profligacy or stinginess are displayed in graphic detail: the rate of inflation, the GDP (Gross National Product), the political climate, the polls, the polls. , and so on, who will run politics for the next five years. If we are re-elected three times, we will be kicked out of the House of Lords, and if we perform well enough we will go into the hall of fame, eternally revered as the great illustrious; Hattersley, Lenkins, Lawson, Callaghan.

There is an annual salary with the public sector unions and they can make some pretty outrageous claims. They usually settle for a percentage of their claims, but if our offer is too low after three meetings with the negotiations and they don't accept the negotiations, there will be a strike. The polls become uncomfortably important in the fifth year, when the election looms and we suddenly regret not spending more on welfare and education to keep the mob happy. If our popularity has dropped too low at election time, we will see the opposition racking up seats at breakneck speed.

The program is designed primarily as a teaching aid for students of economics, and the interesting accompanying booklet provides a brief overview of the economic structure of Great Britain. Things tend to be a bit monotonous in presentation and endless lists of figures that can block our brain a bit; but then one could argue that this captures the typical budget vibe very well. There is a home view on screen formats and their graphics, including some spelling errors.

The economic simulation is obviously very simplified, but surprisingly realistic and subtle: incompatible policies that destabilize our economy too fast and many adjustments and fine-tuning of the numbers are needed to maintain inflation, loans, wage claims and public support.

Yes Chancellor! works on four levels of difficulty, the first would be like “a water test” up to a maximum of four that we would already have to “walk on water”, and the difference may not be evident until we realize it in the third year of the game. higher level, with more or less the same figures that charmed a Nation in the first level, but that inflation is rampant, the economy collapses and the peasants rebel. It's so much fun to test our favorite theories and see how quickly things get out of hand!

There are bound to be deadlocks with any model as simplified as this and the author, absolutely commendable, encourages players to think critically about it. Taxes, for example, are put as a simple average, so there will be no way to test direct against indirect taxes; investments in industry are quite simple, and unemployment is treated rather superficially (although some might say this is just a reflection of real life).

Rampant unilateral disarmamentists can happily spend $40 million on defense year after year with seemingly no effect except, in polls and opinion polls, despite alarmist messages like “high tensions abroad,” “threats,” and so on. being able to do what we like. The model was, according to the brochure, previously tested with students. Hence it is very simple and straightforward, very easy to follow and requires no prior knowledge of anything at all. It's also a very solid program that seems pretty immune to incoherent abuse with inconsistent or just plain silly numbers. The obvious market is for schools and universities, where it will be a lot of fun and very instructive.

As a serious simulation it's fairly simple and as a game the very simplicity of the program means the possibilities are limited and the novelty of seeing your own economy defined can quickly fade.

To help you make these decisions, the computer throws out suggestions, not about specific amounts, but about areas to target. Popular movements among the population stand out. However, whether you act on them can be influenced by such things as an upcoming election (not that budgets can be influenced by things as vulgar as opinion polls, right?) and how much money you have.

Once your financial strategy is outlined, you have to deal with the repercussions. The new inflation rate is revealed first, and then public sector wage claims come in. The unions always want more than the rate of inflation, even more if the back tax is high, and much more if the economy is doing well, to share in the prosperity. So it's time to get down to business with the negotiations.

You get the opinion to immediately give in or fight. If you choose the latter, you have three chances to make a reasonable offer before they go on strike. Sometimes the unions give in and take half of your original claim, other times it's all or nothing and a strike ensues. The effect on the country is represented by a set of graphics as you try to outplay your opponents. The cost, who is on strike, and the votes won or lost as a result of his admirable hard line are all illustrative. Inevitably, the nature of the negotiation forces him into a confrontational mode where criticizing unions is only as good a business strategy.

Once the union hurdle is over, it's time to continue for the rest of the year. Interest rates have to be fixed, reserves adjusted and whether or not to invest in the industry. Then come the reports on their performance. The state of the economy this year and its expected shape for the next are outlined by the treasury.

Public opinion of your performance is measured against opposition, policies, your inflation record is displayed, as well as other graphs that indicate your relative success or failure. Every five years there is an election (and regardless of what the manual says, you can fool all the people all the time. Give them bread and fun at the beginning of your fifth year and watch your popularity rating rise). After the business of the year is done, watch and watch as the votes are counted and seats are won and lost, success is greeted with an offer to continue in the job.

Yes Chancellor! It is a good introduction to the workings of economics. It is constrained enough to be understandable to the layman, but realistic enough to be successful but impossible for an extended period of time. There are elements of economics that are not represented or apparently misrepresented, but on the whole it manages to avoid political doctrine.

The NHS is safe with Trenton

Unfortunately, the educational benefits of simulation are limited. People interested in the economic mechanics of the modern world will do well and learn more. However, those who are cold on the words “fiscal policy” will simply treat it as a simulation and play with the economy, raising taxes, disbanding the army, giving nurses a decent wage and so on.

Students learning economic systems and theories will find Yes Chancellor! frustrating, because while it is a very accurate working model of the British economy, it is oversimplified.

It allows us to verify our favorite theories and rule out our rivals or just have a little fun.

No line is drawn, for example, between the various forms of taxation, direct or indirect, progressive or non-progressive, on which the ultimate goal should be based, so the possibility of true economy has been eliminated.

But even at home, it would make a nice executive toy for those who like something less trivial than sci-fi adventures, and in the words of the old Yorkshire saying, those who like this sort of thing will like it. 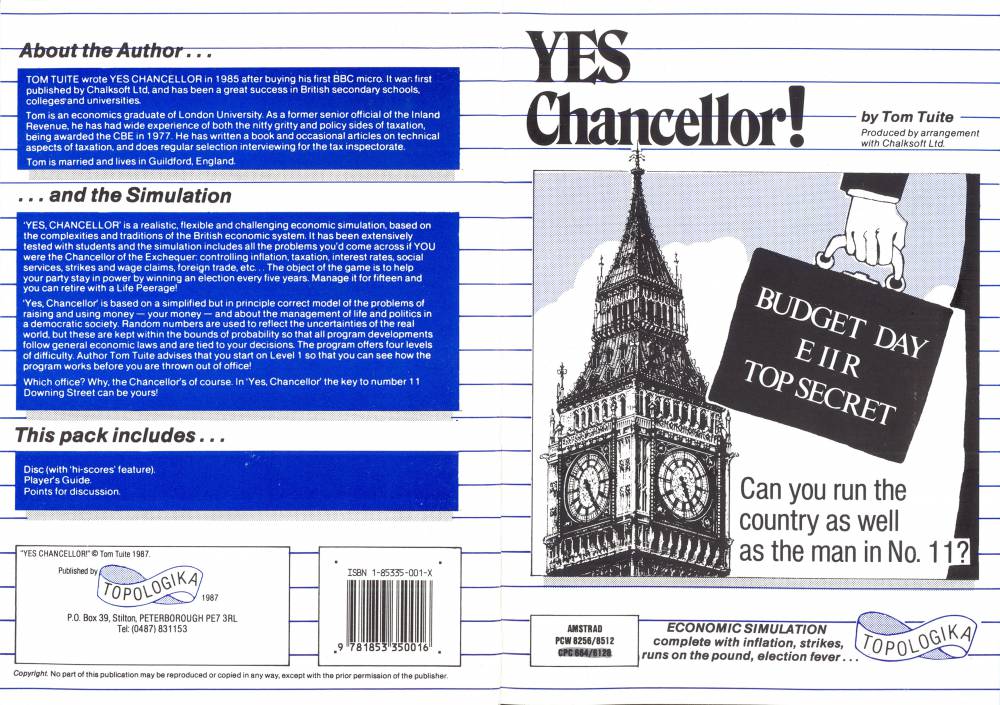 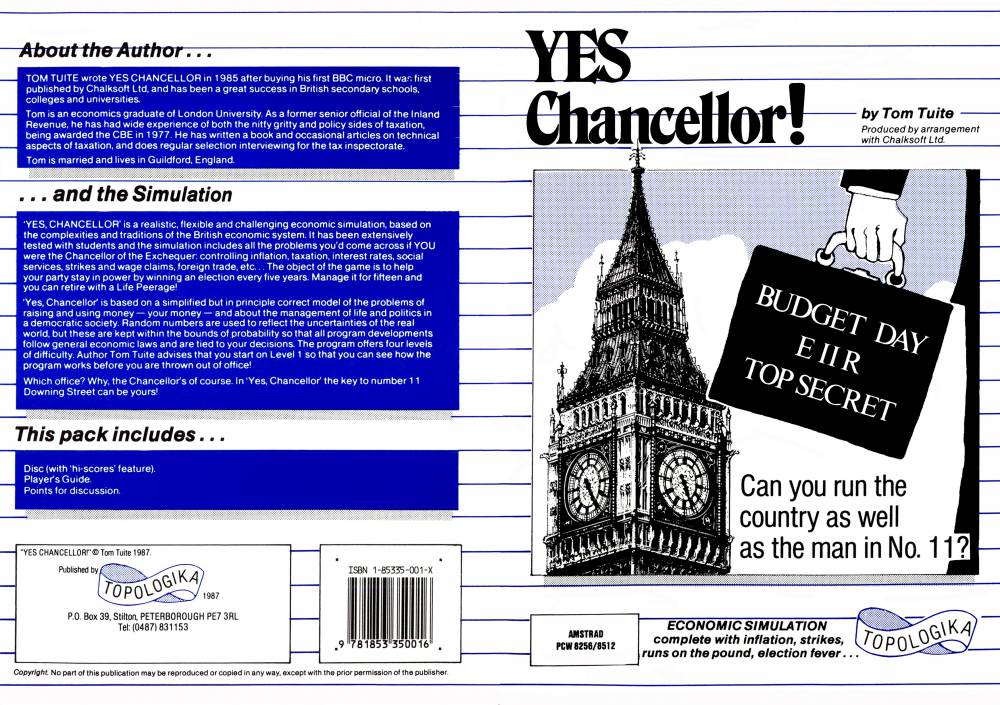 The manual is printed on plain black and white paper with color covers on cardboard. Its dimensions are: Width 14.90 cm x Height 21.00 cm. 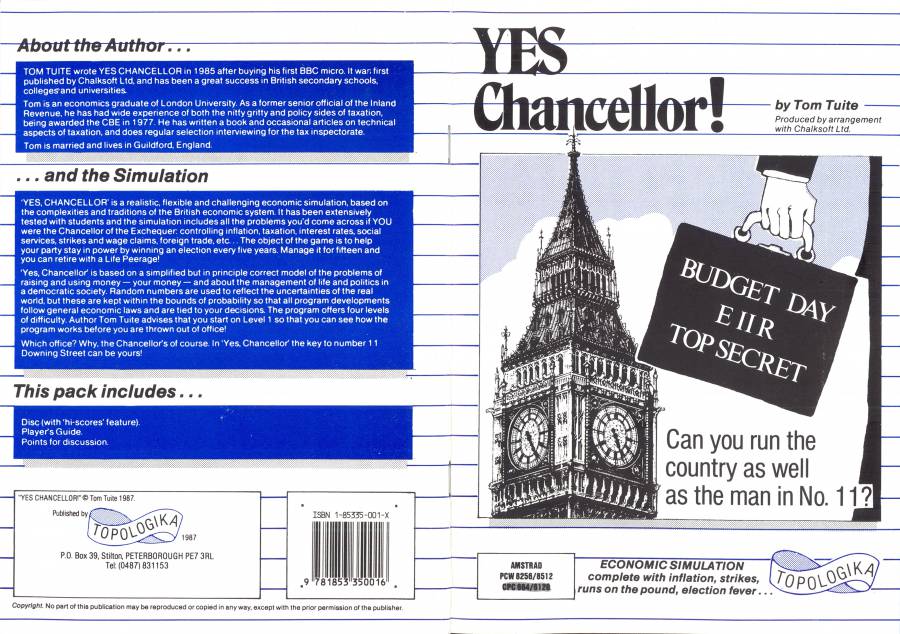 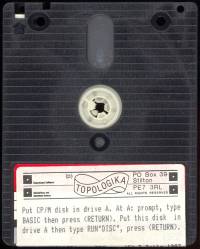 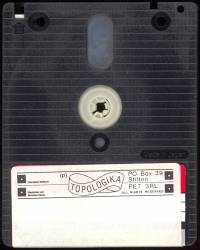 Custom labels to print. Over the years due to their use, the labels are damaged and lose their color and quality. Now we try to adapt the most similar to the extent of our possibilities, the labels so that they can be printed and replaced or for those of you who work with a copy of the program and preserve the original disc. Measurement in 3“ height: 7.00 cm - width: 7.10 cm. The first image corresponds to the original game label, the second is the same modified label to replace the broken one.

Some advertisements for the game in high-circulation magazines of the time. 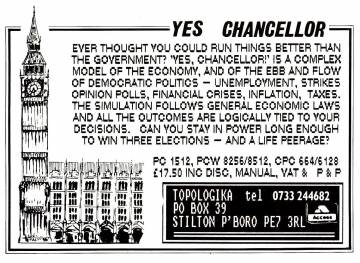 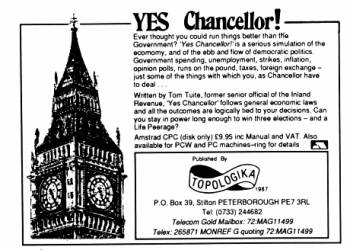 The disc images, taken from the original version of Yes Chancellor!, have been recorded and verified.