Trace: • micro_design_2
Translations of this page: 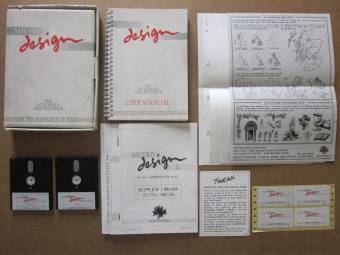 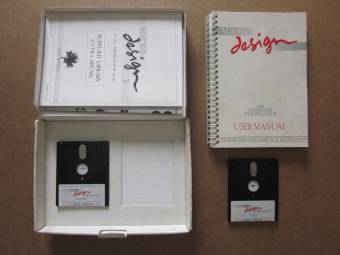 After several versions of Micro Design (MD), Creative Technology decided to release this fabulous program, improving and adding new operations, with the result of achieving a professional and easy-to-use utility. In Spain it was distributed by LINE.

The definition of MD is that of a Page Processor. Under this generic title all those programs that help us mix text with figures or drawings are included. In the case of MD, the text can be created previously with other word processors or with the built-in word processing itself, as well as the graphics, which can come from other drawing programs or be made with MD itself, since it has Lots of help to improve or modify the drawings.

It is the most important quality of MD, since to use most of the functions only six keys are needed, the four of the cursor and another two to accept or reject the selected options. There are two other modes of operation, one is with the mouse and the other by pressing the initial of the name of the function that appears in the menu on the right. The mouse can be AMX or Kempston and you can adjust the speed of movement of the cursor and other parameters of the same.

In addition to the main window, in which we can see the work done, we have three other smaller windows. On the upper right side we can always see the menu with all the options available to us, below it a small diagram that represents the fifteen keys of the numerical block, with a symbol relative to the function that each of them has when you press the same time as the EXTRA key. In the lower left part of the screen we can choose between having the set of icons available to be used directly visible or not.

The main menu has six options, which we will detail below. LAYOUT is the first of the six and if we choose it it will show us the reduced page so that it fits on the screen, with this we have a general view of the work carried out although we lose definition and the small details will not be appreciated. With this option, another submenu appears, which highlights the operations to save and load large areas of the page from disk, or move them from one point to another, as well as the selection of all the parameters that will intervene when the text fills the space corresponding on the page.

The second of the selection possibilities of the main menu is EDITOR, and it refers to the text editor with all the handling operations of text files on disk.

Another option: DESIGN. It is similar to the text editor but it is useful for graphic design. It has several options, among which line drawing, geometric figures, icons, zoom, etc. stand out.

The next option, ICONS, is responsible for helping us modify the icons to our liking, as well as loading or saving them to disk. Similar to this is the FONTS option, only applied to the different types of letters that we have.

And finally there is OPTIONS that refers to different parameters such as the speed of the cursor and the mouse, the selection of the type of mouse and printer or the types of text files.

Although the manual is abundant in examples and figures, it is not translated, which can present a problem for those who do not know English. As a curious fact we will say that it has been made with the same MD in high resolution mode and using a PCW 8512 connected to a laser printer.

This version with respect to other versions has some improvements that make it superior to them. In previous versions, resizing was not allowed, so that once the drawing was done, it could not be increased or decreased in size, sometimes preventing the correct distribution of text and graphics on the page. This problem is fixed in this new version and it even has other possibilities like rotating the image or inverting it like in a mirror.

A simple, although complete text treatment has also been added, which admits texts previously created by other well-known programs such as Locoscript or Wordstar. At the time of putting the text on the final screen, different types of letters can be used for titles, headers or footers, words in bold or underlined, etc. You can even restrict the text area to a rectangular block and column with or without dividing lines. A very practical option allows you to save all the data related to a page format to disk in order to retrieve it and use it later. This allows us to make similar pages without repeating the formatting settings. In the file thus created, the data on the size of the page and the resolution, the size of the letters, the spacing of the characters, the position of the text window on the page and the number of columns, if any, are saved.

In terms of hardware, the MD is compatible with all PCW models, although not with all printers, since those of the 9512 model are unable to reproduce graphics. In these cases, it is mandatory to use another printer, dot matrix or laser, connected to a small CENTRONICS or RS-232 port. On the other hand, the high resolution option is not compatible with the 8256 model due to the large amount of memory required in this format, unless we upgrade this model to 512K memory.

As we have said above, the compatible mice with MD are the AMX and the KEMPSTON.

Compatibility in the software section is divided into two parts, drawings and text, the latter is well taken care of in this version and admits texts from some of the best known processors: LOCOSCRIPT and WORDSTAR, although the texts created with MD do not work for other processors unless we clear them of control characters. Also supplied with MD is a converter program to convert the FONTS, or different typefaces, created for the Stop Press program to MD format. The drawings and graphics can come from the drawings and icons bank itself or from other programs such as Stop Press, Desktop Publiser, Mini-Office or the ROMBO brand image digitizer.

In this section it should be added that the keys to manage the MD are compatible with previous versions, this means that those who are used to using MD in previous versions will have a much easier time getting used to a new version.

Clearly Micro Design 2 ticks all the boxes to become the replacement for other major desktop publishing programs.

Its use is very simple with very few keys and it improves its handling by adding the use of the mouse. It allows us to column, a very good printing routine and a large number of drawings already made and supplied with the program itself. The worst thing is that its manual comes only in English and its resulting screens are not compatible with other programs. In general, a highly recommended program for desktop publishing.

Here you have the front and back of the original box. 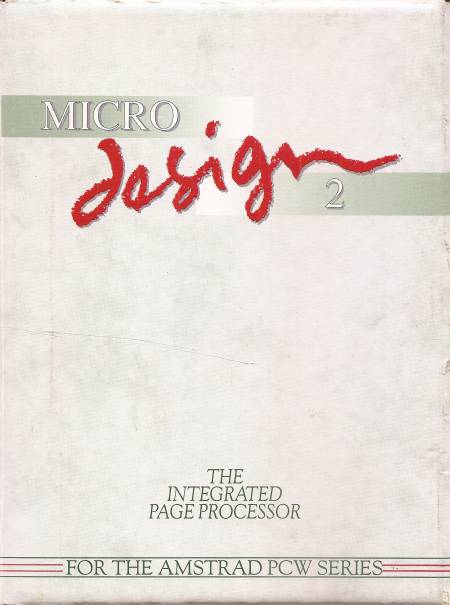 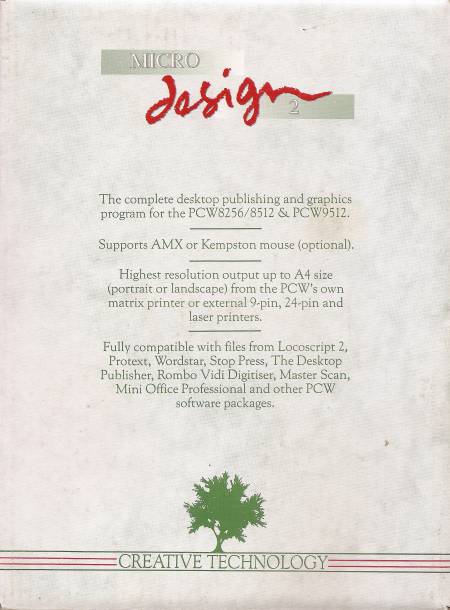 The manual is of the metal ring type and its covers are made of hard cardboard. Its measurements are: Height 21.00 x Width 15.00 cm. 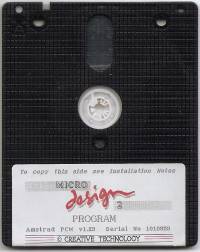 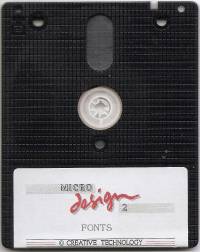 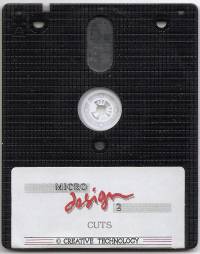 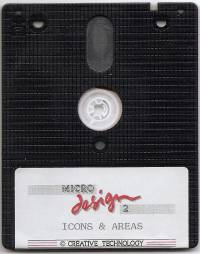 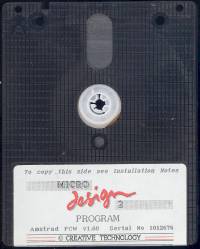 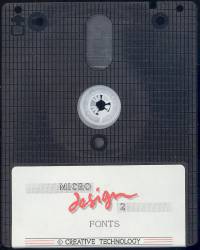 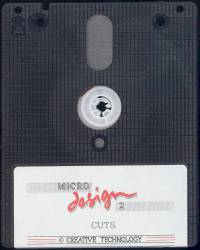 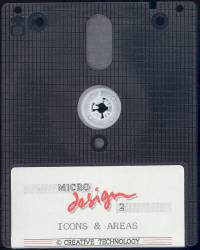 Custom labels to print. Over the years due to their use, the labels are damaged and lose their color and quality. Now we try to adapt the most similar to the extent of our possibilities, the labels so that they can be printed and replaced or for those of you who work with a copy of the program and preserve the original disc. Measurement in 3“ height: 7.00 cm - width: 7.10 cm. The first row of images contains the original MD2 labels, the second row is to replace the old 3“ ones, and the last two rows are the labels for 3.5” discs.. 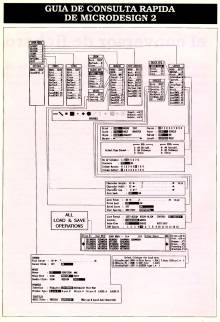 Micro Design is a good desktop publishing system but can sometimes be a bit confusing when it comes to scale drawings, and this can be very helpful in getting the scale right in applications for video and cassette case inserts, record cases and anything that specifically needs to fit a drawing into a middle space. And to make it easier, here are some tips:

Once you've drawn it with a ruler and seen how many centimeter marks intersect the 8 point block scale, you can adapt it to Micro Design 2 and print it.

The disk images, obtained from the original version of Micro Design 2, have been recorded and verified.

Below you can download the manual or instructions for the Microdesign 2 program or view it online.