Trace: • iris_show
Translations of this page:

This game is an adaptation of the “AntEater” machine, an arcade conversion by Tago Electronics from 1982, with the difference that here the bugs to be swallowed do not move, but appear anywhere in the anthill to stay there. Although AntEater was not so popular in the arcades, it had a good amount of conversions, some even developed by the same author, although there is a title inspired by the arcade called Freddy.

Freddy, a friendly anteater, must procure his favorite food: ant larvae. You, as a good ecologist, must help him hunt such a succulent delicacy, so that they are safely in the stomach of our bear.

In this game we take the role of an anteater whose objective of the game is to eat all the larvae or eggs of the anthill through the various screens, while avoiding or consuming other insects that swarm within the colony, and that is while the tongue of our bear anthill spreading through the galleries is exposed to ants, sting us with their lethal poison and the game ends. We can immediately retract the tongue, but not abruptly, but he can pick it up five at a time and to pick up the tongue Freddy will have had to advance at least five units, but keeping an eye on everything that is happening on the screen will be a challenge.

You have to be careful with the ants, which are dark in color, which will appear from the blinking larvae, and these in turn from the eggs. There is a time limit to finish each level. The indicator below, determines the eggs or larvae that you have eaten in each “BOL” of food, you need 5 “BOLs” to finish a level.

This is a fun game, with a pleasant conception and excellent design.

Zinco must eliminate in each level a certain number of radioactive cans, without reaching the garbage can.

However, each time Zinco performs a movement it spends an adjustment unit of its internal clock, the adjustment is recharged by taking the clock-shaped drums.

Every time Zinco destroys a barrel it will spend a unit of energy, which is recovered if the energy battery is taken.

In order to take a barrel, you will need at least a number of energy units equal to the giant number that appears on the marker. A limited number of clocks are available, indicating the number of points at the top.

If the trash can goes over a clock or a battery, you will no longer be able to recharge that marker.

The danger on the highways of your city has increased considerably since the night driver has appeared in Driver City.

Your mission is to clean the highways of your city of oil, without colliding with the night driver, or with the mines, which explode when you approach.

When you finish with each phase you will get out of your car and you will appropriate the fuel that will appear, all this in less than 10 seconds.

You are the driver turning counterclockwise. You have 40 laps to finish each phase or you will lose a life.

If you want the game to slow down, hold down any “CONTROL” key.

The manual is printed in the same triptych as the cover on glossy black and white paper. 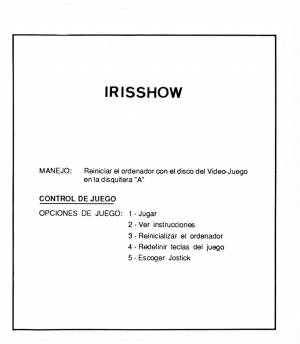 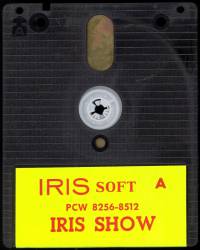 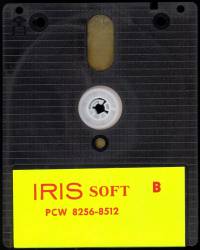 Custom labels to print. Over the years, due to their use, the labels are damaged and lose their color and quality. Now we try to adapt the most similar in the measure of our possibilities, the labels so that they can be printed and replaced or for those who work with a copy of the program and preserve the original disc. Measurement in 3 “height: 7.00 cm - width: 7.10 cm. The first image corresponds to the original label of the game, the second is the same modified label to be able to replace the broken one. 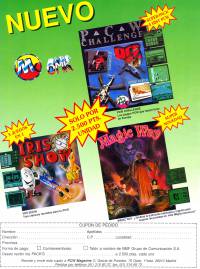 The disc images, have been obtained from the original version of Iris Show, have been recorded and verified.