Trace: • goody
Translations of this page:

This successful game from the Opera Soft company, well known to CPC and PC users, was considered one of the great novelties in the PCW world. Goody narrates the fortunes and misadventures of a noble lord who, by fate's misfortune, is forced to use one of the oldest professions in creation: theft.

These unorthodox ideas are put in our minds by the Spanish company with the creation of this game, making us feel like the bravest thief in town “GOODY”. This name is an alias by which the police and other professionals know him; In reality, our friend comes from a good family that has fallen apart, and among some things, bad company led him to the art of theft. But Goddy, he has an extraordinary intelligence, yours, he has already thought that snatching wallets is not going to get him out of poverty and where he can put him is in jail.

If they put him in the train, it will be for something big, like robbing the largest bank in the city and not for stealing wallets. From his residential sewer hovel, Goody prepares to carry out his business. Today is day zero, his motto “succeed or die … preferably disgusted in jail.”

The latter, tired of the constant fights he has with Rodríguez, a policeman who knows his “tricks” who tries to put him behind bars in order to get a promotion, and with “Charly el Bardeos”, a well-known razor in criminal circles, whose only interest he finds himself in stealing from “Goody” what he has stolen, he decides to strike a blow that removes him forever: robbing the great bank.

In order for “Goody” to achieve his purpose, we must help him to get the thirteen cylinders distributed throughout the game, which will allow him to open the bank safe.

Before, the largest possible number of money bags must be removed, which will allow us to go to the hardware store and buy the necessary tools to give a hit of these characteristics. All money bags are well guarded. These tools must be placed orderly in the boxes that we will find in front of the strategic doors of the bank; In the event of a mistake, we will pay for it with a good stint in jail.

Every visit to the hardware store with money. of course, he will allow us to take a maximum of four objects (if the money is enough). Once inside, we will select the objects by pressing space and at the same time the cursors.

To achieve the objective of the game we will go through a thousand and one screens until we reach the bank. In these screens we will find all kinds of enemies, such as sewer rats, jumping fish, drops of water, snakes, even a monkey! And, of course, our longtime enemies and guilty of our current situation; Rodríguez and “Charly el Bardeos”. Apart from these dangers there are others like the moon, which throws drops of water and upon contact with us we lose a life. Or the helicopter launching dangerous guided missiles at us.

If we are able to get the thirteen cylinders, pass all the dangers, not only the previous ones, but those that are in the bank building, such as ghosts, friendly office workers who are dedicated to shooting planes against us, cleaning ladies, etc. , and place the tools in the correct way, we will finish the game. An adventure for lovers of good games.

A nice Goody game conversion that will keep PCW users not disappointed by going from color to green phosphor. The graphics are of an excellent quality and great speed of movements. The sound, as is normal in Opera games, does not exist. The plot, the difficulty and the quality with which the game is made makes it worth having in our collection. 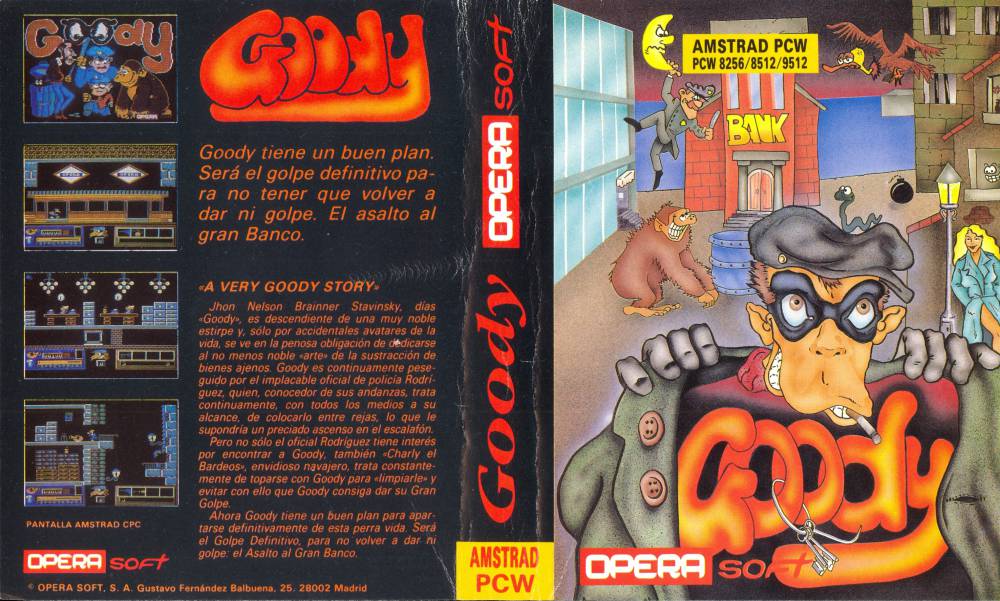 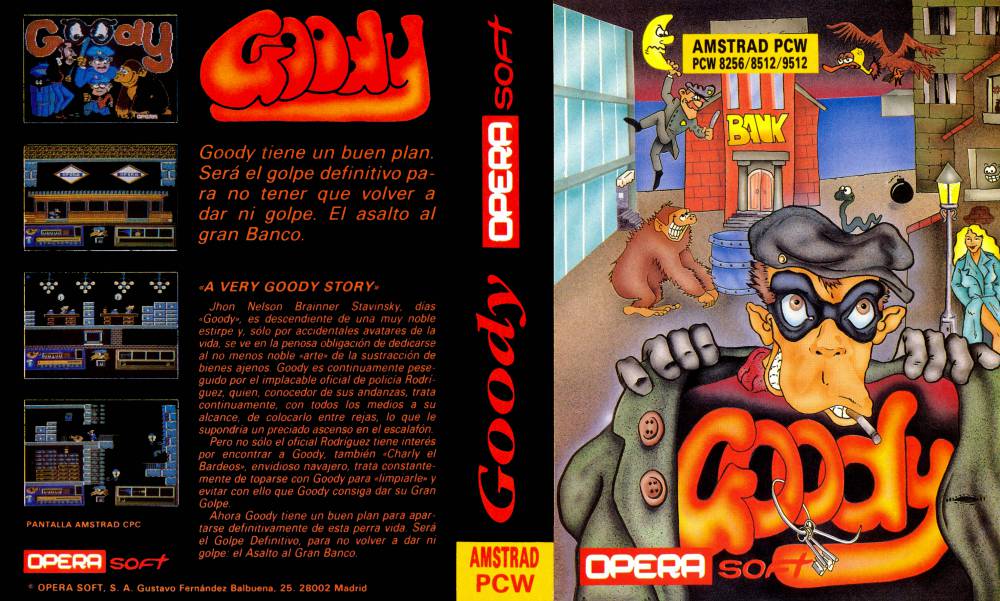 The manual is in black and white on glossy paper and is printed on the back of the game's cover. Its measurements are: Height 15.50 x Width 25.80 cm. 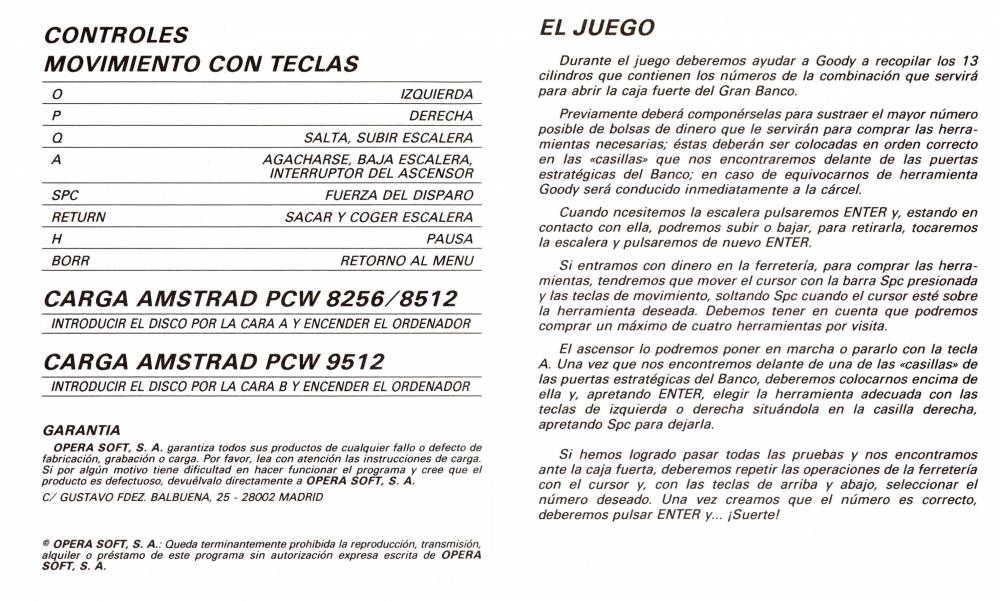 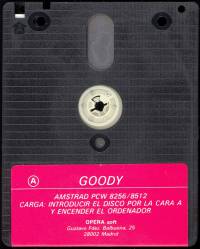 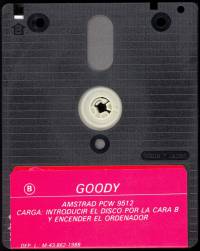 Then we leave you the map so that it is easier for you to finish the game. 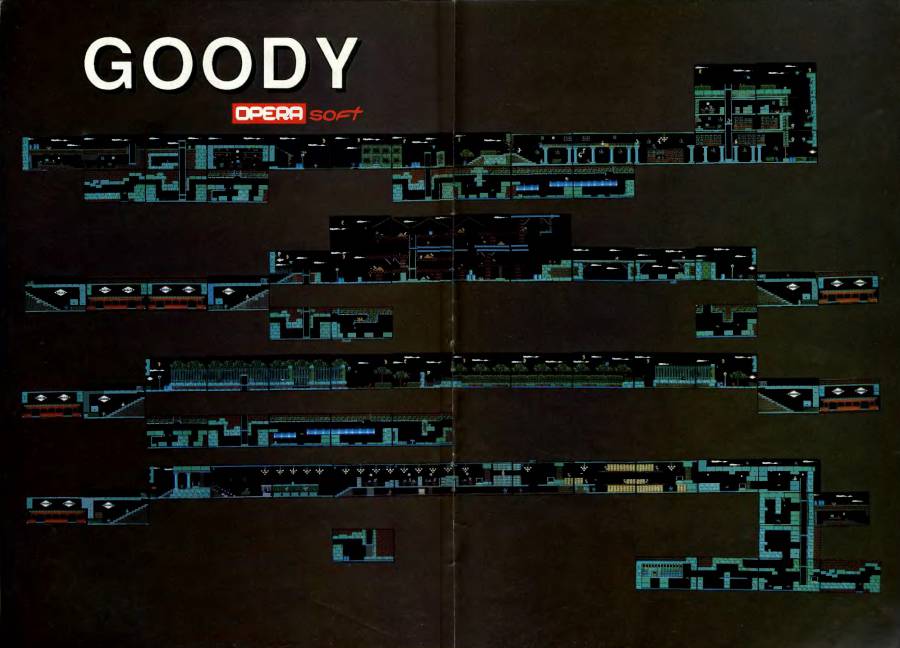 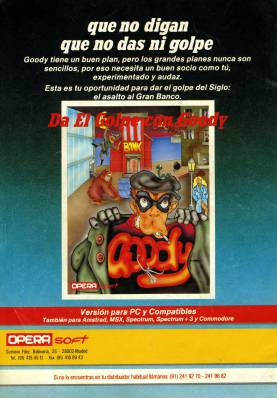 The disk images, disk, have been obtained from the original version of Goody, they have been recorded and verified.

Below you can download the Goody game manual or view it online. The manual sheet measures: Width 12.89 cm x Height 15.50 cm.