Trace: • frank_brunos_boxing
Translations of this page:

PCW owners can already slap their hands on their computer screen, Frank Bruno's Boxing is another conversion made from an old CPC game.

Apart from Match Day II and a few others, few sports simulators exist for the PCW. Hence, the appearance of a boxing simulator may be surprising. With Frank Bruno's Boxing, lovers of this sport will be able to enjoy eight exciting fights against as many opponents.

This time the PCW stops being such and becomes someone of flesh and blood. Frank Bruno´s is the character, an agile and strong black English. He is known in the boxing world for his rapid rise, but now the time has come for him to pass the litmus test. He must face the eight best boxers from around the globe and beat them to get the World Heavyweight Championship, more or less that's the story.

Boxing could not have had better credentials, as it has been produced by Elite, one of the biggest creators of successes for other teams. This time the result is very satisfactory at the very least. This is the traditional boxing match seen from behind the back of our man and facing the opponent, who does not stop bothering with unorthodox and usually very accurate blows. Frank is controlled with a total of eight keys that at first are quite disorienting, although with a little practice it is not that they stop being a problem, but, if certain hits are chosen and then some keys are dispensed with, it is easier to exit ahead.

The game is very well developed if we take into account the limitations of the machine. The only drawback is the keyboard buffer it has; It is very unpleasant to see how the opponent knocks us down with a dirty blow because we have not been able to dodge it in time (not due to lack of skill, but due to two or three previous beats still stored). On the other hand, the difficulty in eliminating certain opponents is quite high, but what at first seems like a black point, actually becomes one of his virtues, since with this he gains addiction.

Our mission in this game is none other than to box with our rivals, huge beasts that seem to herd kicks instead of punching. But to see them we will have to defeat them one by one. Already, to begin with, the first one we will face in the ring, Canadian Crusher, is a very careful bully. If we manage to survive his stakes, we will go on to fight the next one and so on until a total of eight. The boxers we will have to face are: Canadian Crusher, Fling Long Chop, Andra Punchederov, Tribal Trouble, Franchie, Ravioli Mafiosi, Antipodean Andy and finally the last and most bloodthirsty, Peter Perfect.

He is a heavyweight, whose professional activity before engaging in boxing was as a lumberjack, as such he has the strength of a brown bear, but instead his slowness is manifest.

His country of origin is Canada and as the first rival he does not offer great difficulties, Frank is much faster and more agile; for the Canadian bear it is a simple appetizer, which serves to loosen the muscles and rehearse series of blows.

He is a much more serious opponent, he is a star of Thai boxing, he not only punches with his fists, but also uses his legs.

His most effective blow is a prodigious flying kick, which he executes to perfection and which knocks out Frank every time he hits it.

He is fast and his series of punches are accurate and forceful, he is a tough nut to crack and knocking him out requires a practice that can only be achieved on the basis of hours.

It is a machine to distribute blows, its great dodge and its prolonged series of hooks and direct to the face, make Frank's job very difficult.

In Russian, he has a very refined technique and is a master of the art of nodding, a stroke he executes with astonishing speed and forcefulness.

The Zulu from a distant Ugandan tribe, with an impenetrable guard and an unrivaled punching rhythm, a match for a self-respecting fighter.

The other rivals that follow have an unattainable level of boxing and promise to be fast and very technical.

Frenchie, Ravioli Mafiosi, Antipodean Andy and Peter Perfect, make boxing a true art, beating them is not available to anyone.

Every time a fight is won, a code appears on the screen (which we must remember very well) that must be used the next time you want to play, otherwise you want to start from the first opponent. This code is generated based on three characters that are requested at the beginning of the game, and which are the initials or reference of our boxer. These codes vary from one game to another, but also change from one player to another, as they are made from the initials that have been entered. The difficulty grows with each adversary (as is logical), but not because of the enemy's toughness or his resistance, but because of the amount of dirty tricks that he uses.

During the fight we can use different blows to surprise our opponent as well as various feints. Frank's range of strokes and movements is very wide; guard up, guard down, opercut, direct left and right to the face and stomach, dodge right, dodge left and crouch. For this we have the K, I, J, Q, L, O, A and SPACE keys, the latter for the K.O. and that we will only use when our opponent is about to caramel, that is, when we have put cakes up to the beret. To use this blow, we will have to wait for the computer warning, which indicates it by flashing the K.O. label, which is located next to the force indicator bar.

Regarding the fight that our opponents practice, we can only say that it is very hard and that apart from defeating the first one with relative ease!? we look very bad with the following. Already Fling Long Chop, the Japanese representative, is a very tough nut to crack. Rest assured that at the very moment you are about to leave him K.O. he's going to give you a panic kick. Each Japanese kick is a K.O. fixed, so to avoid it we will have no choice but to be super-attentive and at the same moment we see him crouch (a sign that he is going to kick) we crouch quickly using the Q key. Anyway, very difficult but quite addictive It is convenient to fight calmly and with a glass of milk by your side because after the dirty things that these beasts do to you, they give you irrepressible desires to throw your computer out the window. As true as I've been playing for an hour.

It can be said that it is one of the Boxing games for the PCW. A normal game in general lines, mainly highlighting the movements of the players, as well as the way of hitting and receiving them. If the creators had put a little more imagination in the presentation of the fights, and careful in the graphics, it would have been a good game.

Although there is a good movement in the fighters, the game does not shine especially for its graphics, being somewhat mediocre. The set is summarized in the presentation of the ring with the opponents and the public in the background.

Frank Bruno´s Boxing is a very good program, with a careful design, it is entertaining and with a very high addiction rate. Difficult but at the same time exciting. Beating a fighter to see what the next is like and how he fights is a true obsession, the different opponents make the program acquire real interest. Recommended for all lovers of games and especially sports programs. 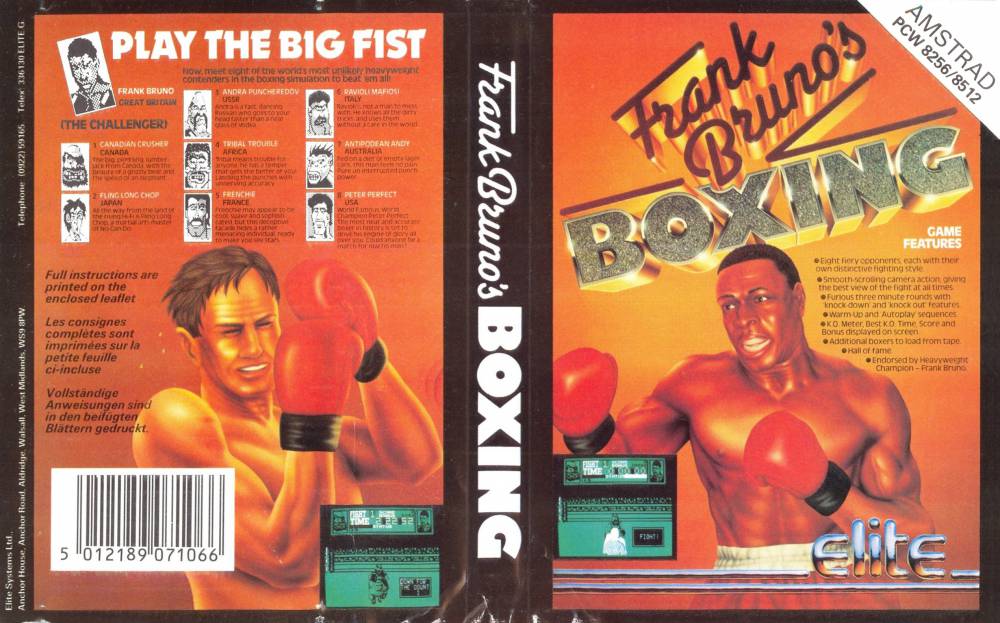 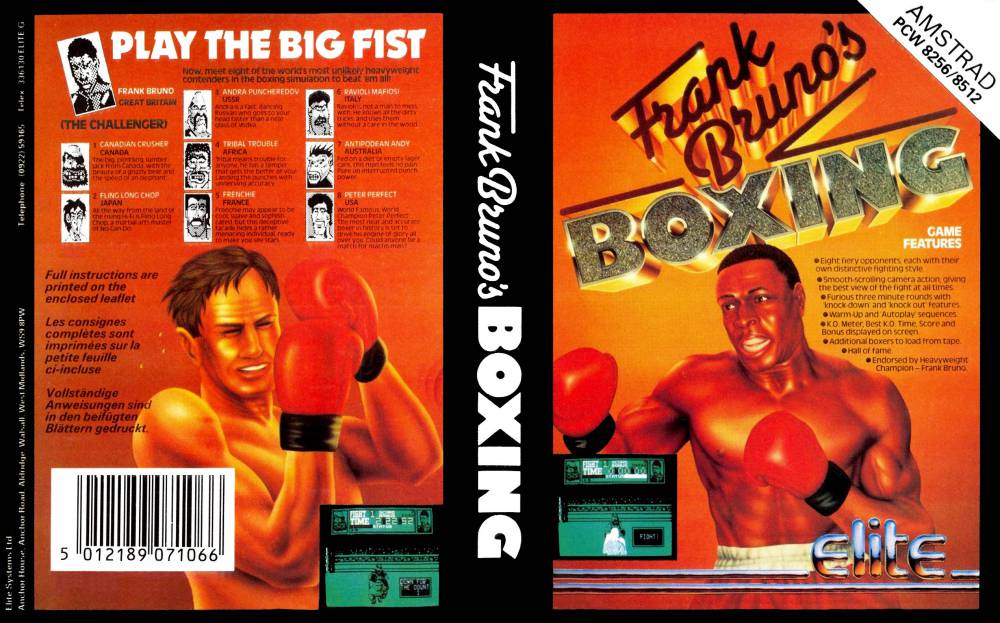 The manual is printed on double-sided, poster-type glossy black and white paper. On one side it contains the poster and on its back the manual in three languages. Its measurements are: Height 29.70 x Width 35.50 cm. 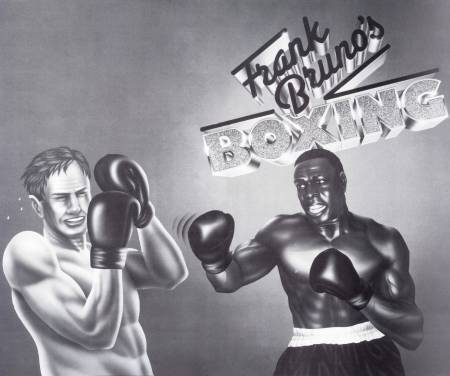 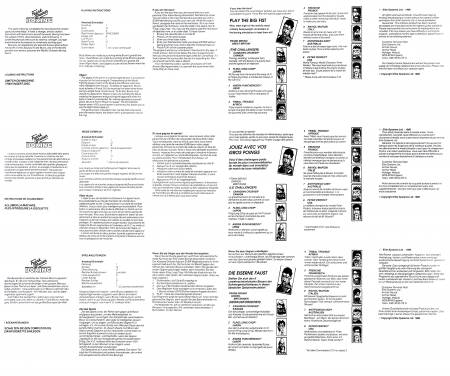 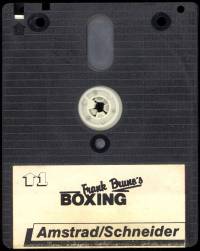 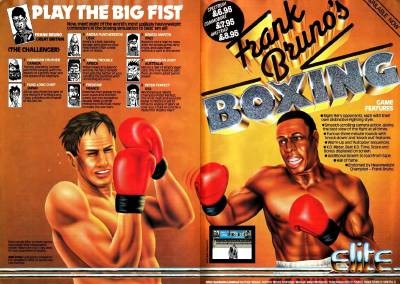 The disk images, have been obtained from the original version of Frank Bruno´s Boxing, have been recorded and verified.

Below you can download the Frank Bruno´s Boxing game manual or view it online.