Trace: • fairlight_ii
Translations of this page:

From the hands of The Edge company, we get the second part of Fairlight, if you liked the first part, this second part is definitely twice as long and a real challenge for lovers of impossible adventures.

The plot of the game is the literal continuation of the first part. As you will remember, in it Ivar went through the castle of Avars in search of the Book of Light, gave it to Segar and left through the great door of the courtyard. As well. This Fairlight starts right there, on the other side of the door, in the woods. We do not find a happy and radiant Ivar, as would be expected after the feat, but a crestfallen and sad villager, immensely sad, murmuring snatches of a gloomy story between sobs.

He had been deceived. He had not delivered, as he believed, the Book of Light to Segar the Immortal, but to the Lord of Darkness, who had tricked into taking the appearance of the noble Segar to get it. With the book in his possession, the Land of Light and Magic would fall into the darkest and darkest of nights. And it was all his fault.

He was still lamenting over his stupidity when he noticed that the air was churning: something human-shaped was materializing in front of his eyes. An instant later he backed away with a mixture of fear and mistrust. The form had become Segar. But was he really Segar? The Lord of Darkness would never use him again. His doubts were interrupted by a deep, hypnotic voice. The thing spoke. Reap. Segar? He asked her for help again. He, Ivar, was the only one capable of retrieving the Holy Book. The fate of the Earth was in his hands. When he had spoken these words the air began to vibrate again and the apparition slowly faded away. But he sent one last message to Ivar: “… What you seek cannot be found, but what you find cannot be lost …”. This being the case, Fairlight II begins.

The game is, in structure, graphics and setting, practically the same as its predecessor, in the form of a video adventure. That ease of handling objects is still present (stacking them, using them, moving them, etc), only the actions you have to perform to finish it change, which are not few or easy.

In order to advance in it, it will be essential not only to avoid certain momentary dangers, but also (and above all), we must find on our way the objects whose usefulness allows us to perform certain essential actions for the proper development of the story.

The momentary dangers to which we refer will mainly be in the form of animals or guardians and these will be distributed throughout practically all of the scenarios that we will visit, both those belonging to the forest and the castle itself. These elements, however, while obviously a slight nuisance, do not represent the real difficulty of this program.

This is found, precisely, in knowing how to find the appropriate application to the numerous objects that we will be collecting. For this, Isvar has the possibility of carrying several simultaneously, although the number of these is variable, since this circumstance is a function of them (the greater the weight, the fewer objects). In this way, we can take them with us to the place where we think they can be useful and thus open doors, defeat certain enemies and even access other new elements.

Another important quality we have is to be able to push heavy objects, in such a way that we can place them in the place of the screen that interests us the most or also stack them on top of each other in order to allow us to reach high places or hardly accessible.

As you can see, the possibilities of actions and movements that we have are truly amazing. However, there are still many other details that manage to arouse our admiration.

Without going any further, the design of the screens is one of these aspects. Each of the objects that make up the game are made with total meticulousness, since even the smallest details are reflected in them. On the other hand, and as if that were not enough, all the screens are really beautiful and attractive to the eye. Anyway, an A for whoever designed the program.

As far as the subject of addiction is concerned, we can affirm that it is one of the most complete and complex video adventures of all that can be found, so the subject of fun, especially for those who particularly like of this type of game, it is more than guaranteed.

If you liked Fairlight, Fairlight II will not disappoint you, as you will find many new attractions in it. Yes, on the contrary, you have not had the pleasure of enjoying the first adventures of this courageous Isvar, you are in luck, because this new program is going to leave you really amazed in all aspects.

Phase I. The ship

The main element of this first part is the boat and you should not enter until you have the essentials.

Your goals for this phase are twofold: get the dagger and the rod. With these two objects go to the ship (be careful, you cannot go out again) and use the dagger to free the captain of the ship who is tied to the mast. With this you will go to the second phase. As it helps, the thing that falls on the first screen is a jewel and you can get it by climbing the tree, stack objects for it: barrels, stones or anything else you can pick up and transport. This gem is hidden in the lowest level of the tree and if you activate it (keys 6-7), the dogs on some screens will ignore you. While you are using it you will not be able to use or take objects, to do this, you need to deactivate it (6-7 again (. Think about it before doing it because you can only activate / deactivate it a few times.

Phase II. In the castle

Once you have cut the captain's bonds, he will take you to the castle of the Lord of Darkness, where the really difficult thing is.

Here the objective is to get to the room where the Holy Book is located, take it and, carrying the dagger, cross the door. There is only one problem: doing it is much more difficult and much longer.

You will have to get the keys indicated and eliminate the monks who guard the last three doors (to destroy them you have to use some of the crystals that are distributed around the castle, but be careful when using them, they can turn against you and destroy you). The last door is opened with the rod, which you will have to carry at all times, because if you leave it in a room and leave it, entering again will have disappeared.

The essential element of this phase is the mat that works in a similar way to the gem (on / off) and that imposes the same restrictions on you, including the number of times you can use it. The mat allows you to fly and access places that you could not get to otherwise.

To finish the game you will need, in addition to being good with the keyboard, to be a good strategist when deciding the order of actions that you have to carry out to get to the book. Think about it before doing anything and take it easy.

When you have the book and cross the last door, it will appear if everything goes well, the last screen- Will it be the end? 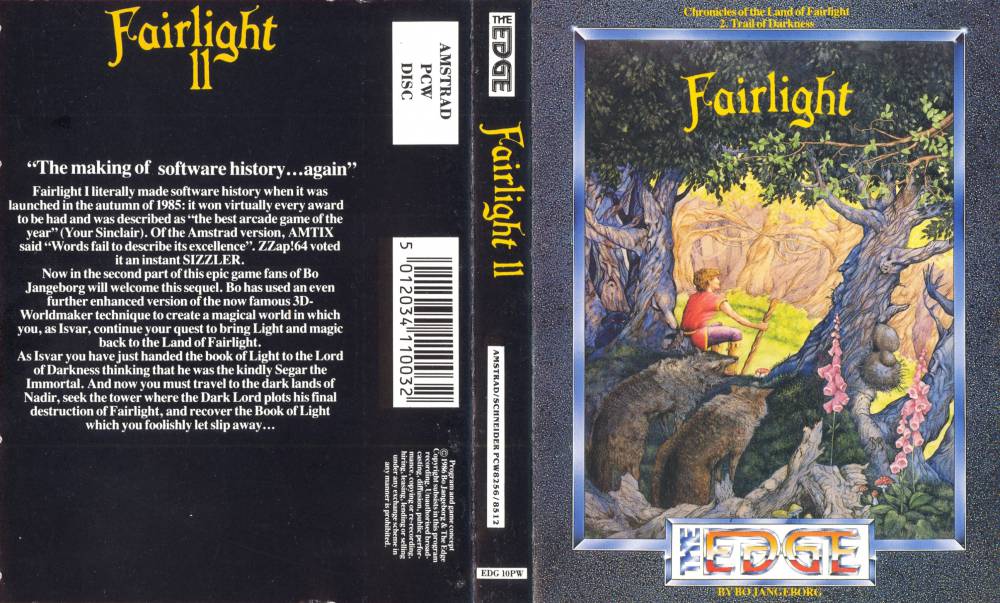 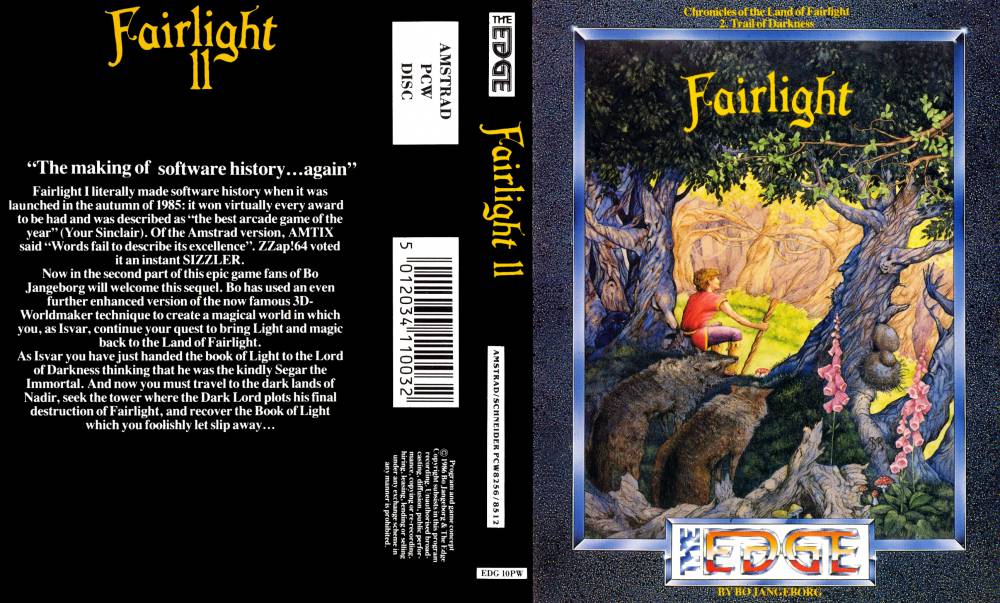 The manual is printed on black and white glossy poster paper. Its measurements are: Height 25.60 x Width 19.90 cm. 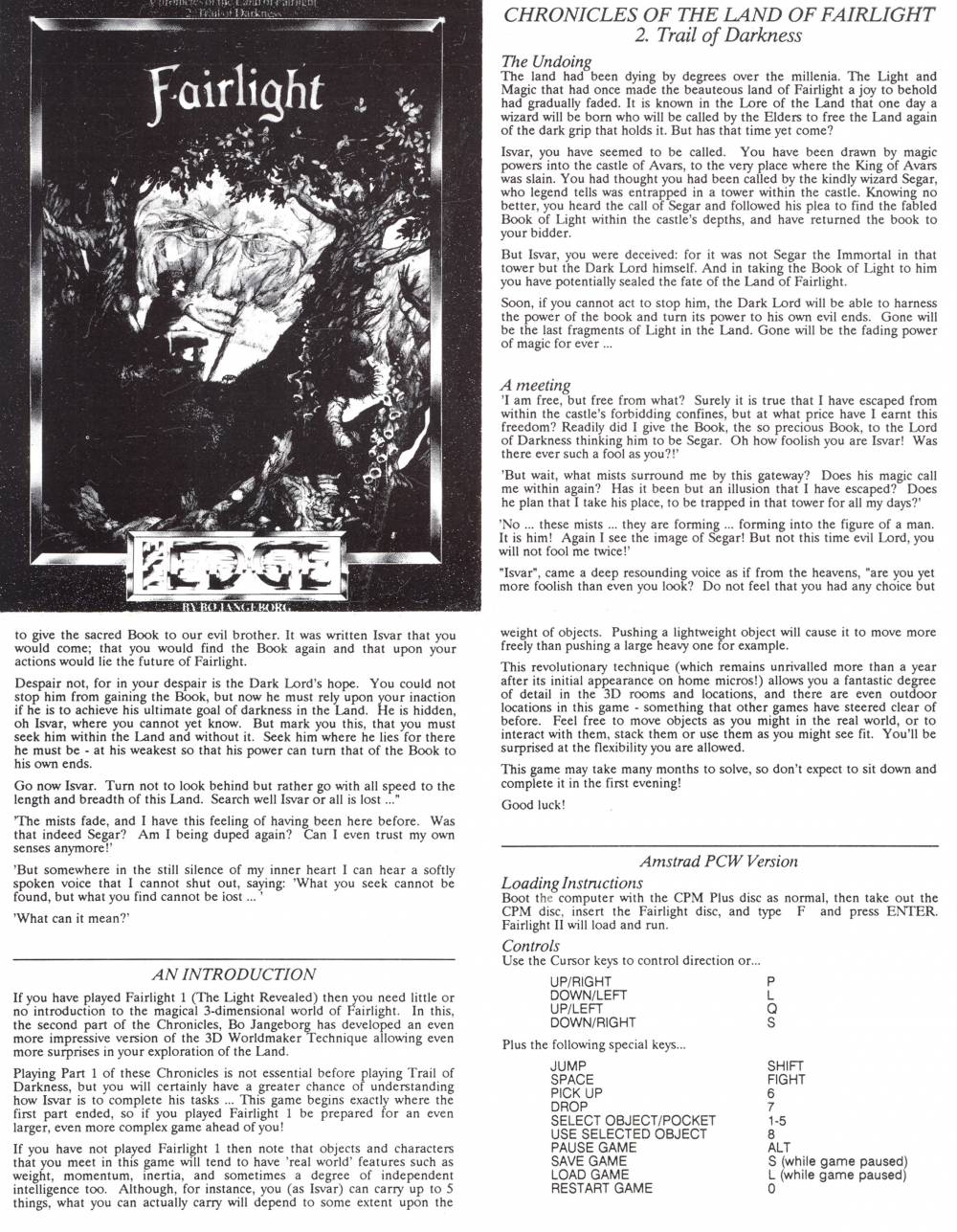 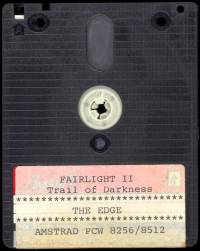 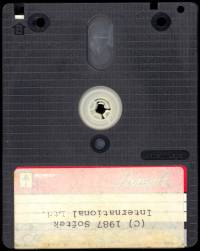 They are printed on triptych-style black and white plain paper. Its measurements are: height 10.40 x length 19.00 cm. 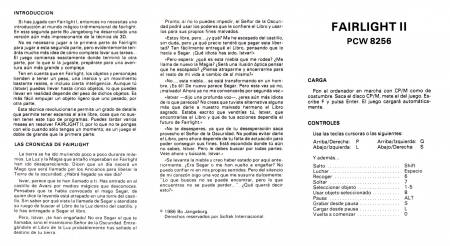 Here are some maps to make it easier for you to finish the game. 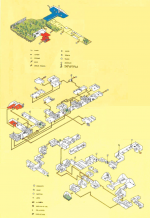 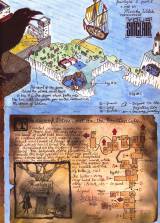 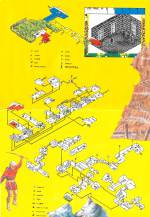 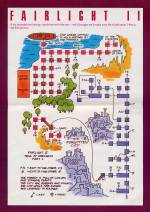 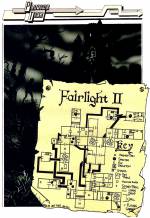 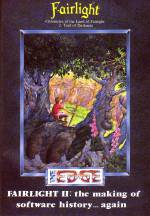 The disk images, obtained from the original Fairlight II version, have been recorded and verified.

Below you can download the Fairlight II game manual or view it online.