Trace: • corsarios
Translations of this page:

“I have been observing suspicious behavior in my crew for days. When I turn to look at the horizon, I can feel the hateful look of my lieutenant nailing my back. I feel the sailors' breath on my neck, perhaps suppressing the urge to throw myself down the neck. I know a mutiny is brewing, I will have to roll a few heads, although I hope there are not many traitors. It is difficult to find good manpower today. (Signed by Captain Black Hair on the 14th of September of the year of the Lord 1678) ”.

The captain was right, but he could not imagine the magnitude of the danger that lay upon him. Most of the crew were against him and the few men who supported him had mysteriously fallen into the sea …

At dusk a bloody battle was waged on the high seas: the famous booty of La Tounty. Black Hair fought back tooth and nail and managed to take down several traitors, but was eventually cut down and placed in safekeeping. They all feared the captain, but they made the mistake of leaving him alive.

Now, imprisoned in the fortress that he himself had long ago seized from the English, he planned his fierce revenge, commending himself to the devil and swearing: “Fear, freshwater sailors, for your daring in imprisoning me! You will suffer horrible torments and will be sharks. ” The day of revenge is near.

Corsair consists of two parts that are loaded separately. The first has a horizontal development and the second also has a vertical scroll.

The hour of revenge has arrived. Captain Black Hair has finally escaped from his prison. Let his captors get ready, which is a gesture of unparalleled daring, they have also kidnapped his girlfriend! Like a rabid animal, the corsair advances through the pirate fortress in search of the exit, taking off countless enemies: blacks from the Antilles, riflemen, bomb throwers, Chinese with chains, machete throwers, quarrelsome tavern fighters , swordsmen, gunners.

It crosses the rest of the fort, the jungle, and finally reaches the sea. The range of blows is quite wide: standing and crouching punches, kick, sweep and even kick jump. You can also collect useful items such as firearms and machetes that the enemy throws at you. The bullets of the blunderbuss are depleted, so it is convenient to use them against the enemies that shoot, because approaching them to hit them is risky.

This phase is for energy. You can regain strength by taking the chests you find or hitting as much as possible to some runaway slaves that appear on occasion.

At the port, Captain Black Hair takes a boat and paddles furiously towards the “Queen Opera”, the pirate ship where his girlfriend is about to be thrown to the sharks by the same villains who betrayed him.

Their salvation depends on your bravery and courage.

The “Queen Opera” is an impressive four-masted ship. The pirates celebrate on board a feast in which the main course consists of throwing the prisoners overboard. The Black Haired girlfriend is now walking the plank. But the brave captain has arrived with his little boat and manages to board the ship by its stern. Black Hair must fight the pirates, as he has been discovered by a drunken sailor who was looking for the bathroom. It seems as if the whole world has turned against him. Even the cute little parrots that once delighted the crew are now fiercely attacking you.

The captain, discovering his girlfriend in the bow, runs off to rescue her. But a stocky black man blocks his way and throws him into the air as if he were a wimp. Seeing that it is impossible to cross that human barrier, Black Hair chooses to go up to the four masts to lower the pirate banners as a superb gesture of his presence on the ship. Curiously, the blacks are disappearing as the flags are lowered. Behind the fourth mast and already on the edge of the board, his girlfriend is about to be fed to the sharks. If the captain exhausts all their lives before managing to lower all the flags, his beautiful companion will end up becoming the shark's snack in a funny scene.

In both phases we have an energy that when consumed ends the life of the protagonist.

We fear that the Opera Soft programmers decided to follow an old saying that goes something like: “if you can't beat them, join them.” Willing to follow the guidelines set by fashion, Opera had just released with this its first fighting game, in which although the good work of the company is appreciated, little or almost nothing offers the boring panorama of such a “crushed genre “like the one at hand.

Corsairs is very much in line with Opera Soft products: without music as usual in PCW games, excellent graphics, exceeding the quality average with settings where detail has been taken care of and with characters of considerable size that respond with precision and speed at the keyboard, and a great activity, creating addiction. The first phase is not very original. It is a good game that will provide you with pleasant moments, whether you are a fan of pirate movies or if you like action-packed westerns.

The manual is in black and white on glossy paper and is located on the back of the cover and is a triptych type. Its measurements are: Height 14.30 x length 42.10 cm. 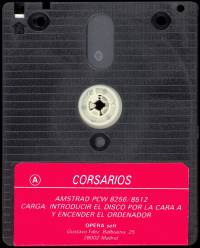 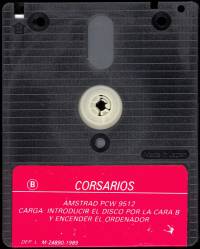 Next we leave you the map of the first and second phase so that it is easier for you to finish the game. 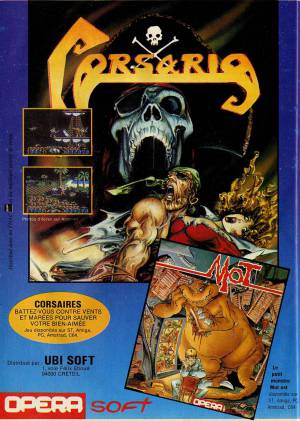 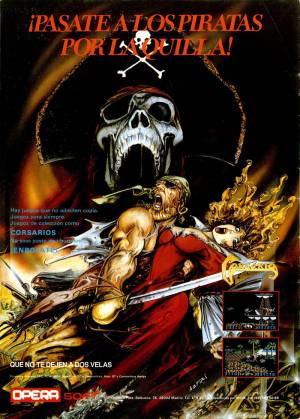 Below you can download the Corsairs game manual or view it online. The manual sheet measures: Width 13.30 cm x Height 14.30 cm.