Trace: • colossus_chess_4_en
This translation is older than the original page and might be outdated. See what has changed.
Translations of this page:

We all know that there are dozens of chess games for the computer. From the simplest to some really powerful ones, through endless titles that we remember distantly. We know of many chess programs, that is the truth, and we have even played on machines like IBM or Macintosh with some that were capable of beating us in a “flash”. Many of them, not the best, let them play and there is no doubt that they played very well but they lacked numerous options that we began to see in games like the one we are going to comment on. Colossus 4 Chess is a program with a different approach than what is generally used in other games of this type for Amstrad.

This is perhaps the most popular of those made specifically for the PCW. The most outstanding note is in the use of the clock to control the time of the plays, as well as the three-dimensional visualization of the board. Newbies or just lazy people can make the computer compete against itself, ideal for learning plays and strategies. It is highly appreciated the opportunity to each create their own library of openings, for when nothing occurs to us. The level is not very high, but sufficient for normal players.

Reading the screen, in principle, is simple, it is divided into two parts: in one we will have the board with the chips (we see it in three dimensions), as well as the messages and questions necessary for the development of the game, another we will have information about the plays made and the time marker clock.

The board and the figures are located on the left, leaving the lower part for different indicators. At the bottom right is the clock along with the names of the players (Colossus - Opponent). This clock tracks the time spent throughout the game. independently for each player. That is, while our opponent thinks about his movement until he makes it, our clock will be stopped, but not his.

The clock stops just at the same moment in which we have just moved a piece and automatically that of our playmate starts ticking. Below are the last moves made by both players. These can be presented in two ways, if the play ends without capturing pieces, the sign (-) will be used to separate both screen coordinates, which are those that indicate the movement. For example: d2 - d4. But if the move has been finished with capture, change the sign (-) for the sign (x), example: d2 x d4. Apart from these indicators, the program shows others on the screen that indicate the position, best line, work line, etc. It also always indicates, or almost always, a recommended movement.

There are 34 recorded games on the disc that we can see completely if we use the Replay option. This asks us in seconds the time interval we want between each movement. When we load any of the existing games on the disk, the game coincides with the end.

Another detail that we really liked is the inclusion, along with the 34 recorded games, of a series of problems or plays that we must solve. In the manual are the specific specifications of each case.

Colossus 4 Chess has a wide repertoire of commands such as: alter position (return to starting position, change pieces, change board position, new game, exit, etc.), lengthen preset time of the clock individually for both players, make invisible the white or black pieces, or both, force the program to move, know the legal movements of each piece, force the program to play against itself, replay, supervision, change the type of game (there are six), print, etc. And there are still some more that we did not mention.

Colossus 4 Chess is a really good and fast program. It is very easy to use and well documented. There are plenty of options, including a library of games and problems. The graphics of the chips are very well done. Great. 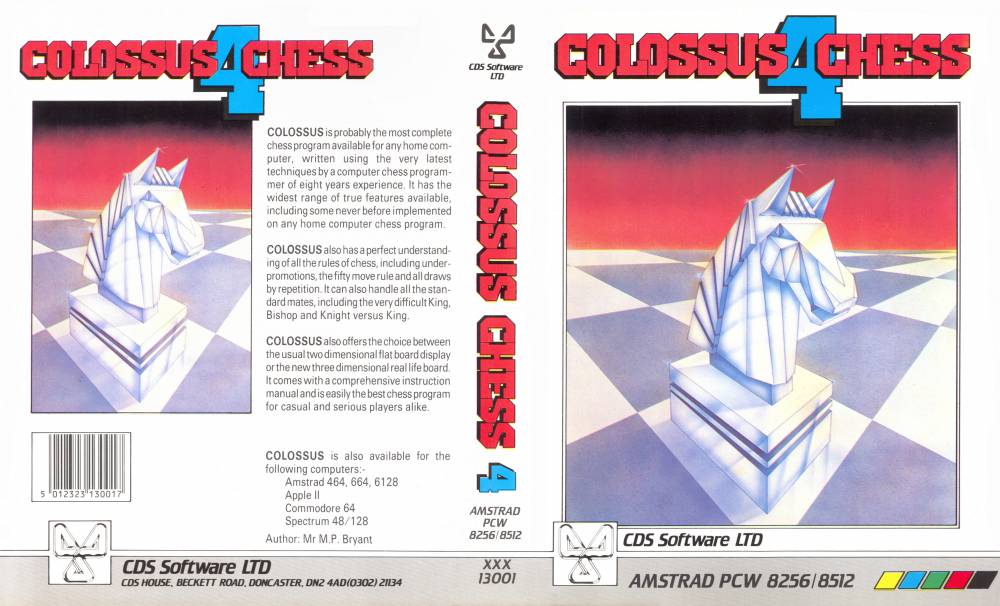 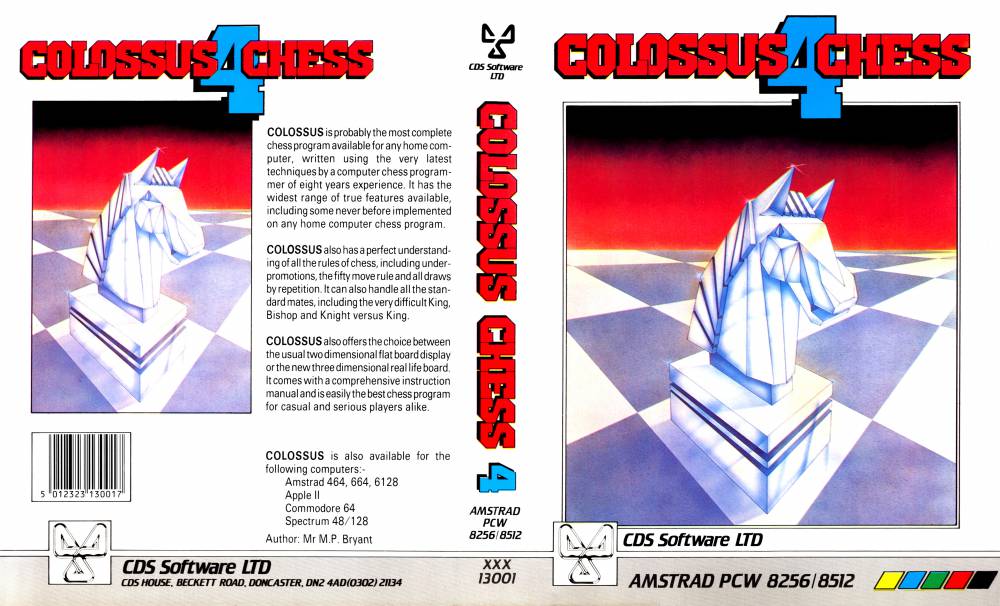 Below is the manual, printed double-sided on semi-thick black and white paper. Its measurements are: Height 13.00 cm x Width 20.50 cm, the sheet. 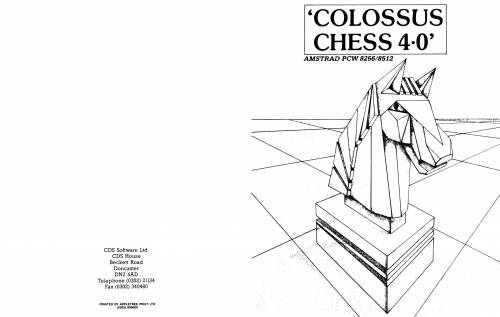 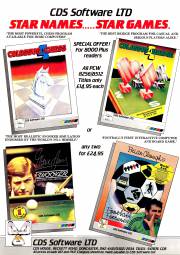 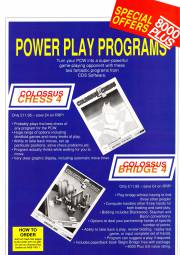 The disc images, obtained from the original version of Colossus Chess 4, have been recorded and verified.

Below you can download the Colossus Chess 4 game manual or view it online. The manual sheet measures: Width 10.20 cm x Height 13.00 cm.