Trace: • catch_23
Translations of this page:

Catch 23 is another of the games that have been recovered from the Spectrum lists, to bring it to PCW. The action takes place on a remote island, where we must neutralize the new prototype CK-23 plane. This sophisticated aircraft (as explained in the manual) is capable of leaving the Earth's atmosphere and staying in space until, at a certain moment and at incredible speed, it returns to Earth destroying everything in its path with its sophisticated laser weaponry.

The main mission of the game (which may seem like an adventure like Rambo does, serving his country to fight the enemy in a risky adventure without any help and relying only on his instinct) is to neutralize CK-23. To achieve this we must find the enemy base (which at the beginning of the game can be a bit difficult) and place a nuclear bomb that will destroy the island completely. Although it may seem a bit easy, we can tell you that it is to spend long hours playing, if what you want is to achieve the final goal.

To get to the base we have the transporters, very useful vehicles to move around the island, that although the creators of the game did not let enough imagination run to draw any type of vehicle (in the game at no time do you see anything similar to the transporter , but we see a kind of bus stop, which when we activate it we start to move), it does offer a good feeling of movement, with some good turns. On the island we must be very careful, since there are several dangers: forests, where patrols can lurk behind trees, swampy areas, buildings that keep objects that can be useful to us to reach the end and when leaving them they can bring us some problem. .., and also some strange mountains that nobody knows anything about. A whole situation full of emotions that make CATCH-23 a good game to enjoy in our free time.

As in all war games, the enemy could not be absent, an important part of the game and which is one of the main keys to achieving excitement in this type of adventure. In CATCH-23 we can find two types of enemies: patrols with a fixed route, which are seen in the distance and we can avoid them easily (flight is the best weapon to confront them), as long as they are not aware of our presence. , and foot patrols, dangerous soldiers, whose only way out is the fight to the death with them, where we must have many reflexes and a great speed in the shot to get out of the confrontation with flying colors.

But not everything is patrols, we will also find mines, which immediately explode upon contact, and we can only see them when we carry batteries to detect mines. These batteries can be found inside a house.

Armed to the teeth

To face such a sophisticated and well-prepared enemy we will need to have a good weapon worthy of Rambo himself; For this we have a sophisticated rifle with three spare cartridges, which makes us have a total of twenty shots (although we can find ammunition on the way, it is best not to waste it). Rifle mode enters automatically, once a foot patrol is spotted. On the other hand we have three powerful bombs, which to use we must indicate the explosion time and leave the area as quickly as possible, because once the countdown is finished it will destroy everything that is around it.

CATCH-23 has three-dimensional vector graphics. With a few lines they make good and easily identifiable images (forests, constructions, etc.). Perhaps the only downside that the game may present is the search for the appearance of figures on the horizon and the scarcity of graphics in some parts of the game, giving the game a certain monotony by not having, in these areas, a feeling of front or back scrolling. Enemies give a more “diver” feel than highly sophisticated enemies. In addition, those that appear somewhat distant from us give the impression of being a very simple graphic, hardly distinguishing features of his suit.

Although, as we have already said, CATCH-23 is a “classic game” that has been taken from a version of Spectrum (in Spectrum the vision of the glasses occupies the entire screen, which in PCW does not happen), for users of PCW can be very interesting and entertaining. The attention we have to pay, in case the enemy appears, together with the need and curiosity to look for objects in the houses that appear to us, make CATCH-23 a good game, worthy of being in our collection. 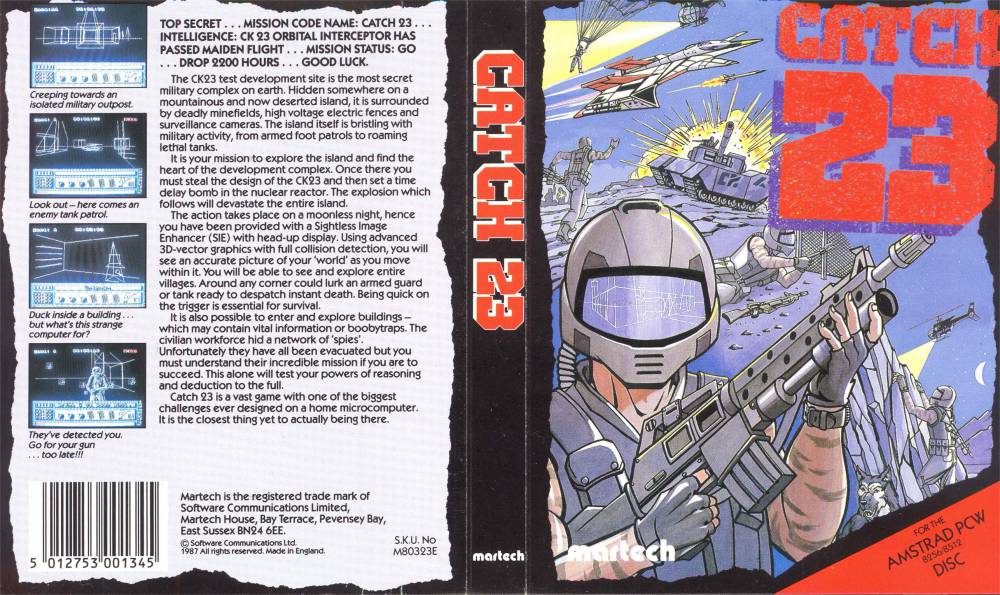 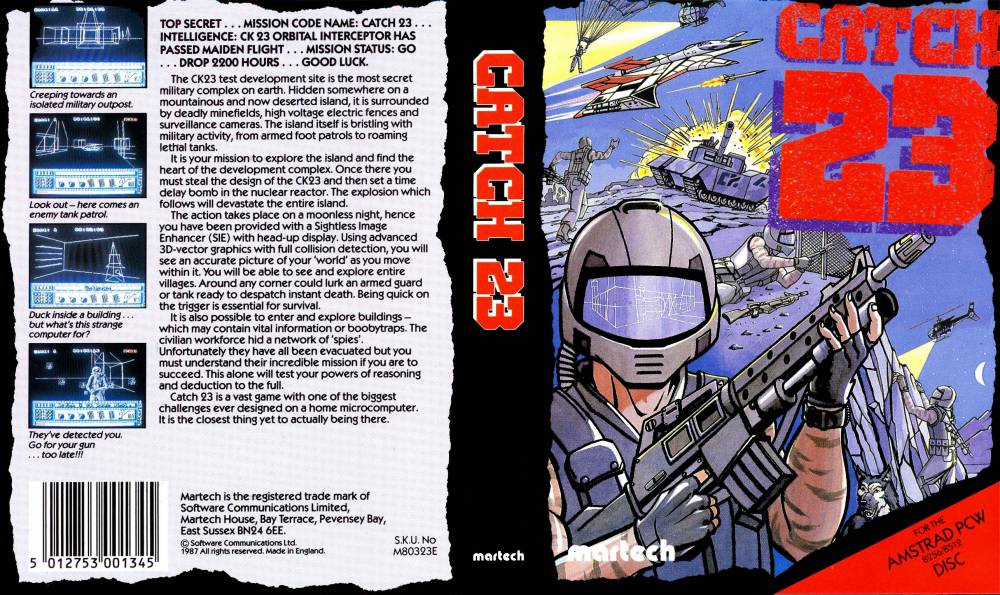 The manual is printed on double-sided black and white glossy paper. . Its measurements are: Height 25.70 x Width 30.00 cm the sheet. 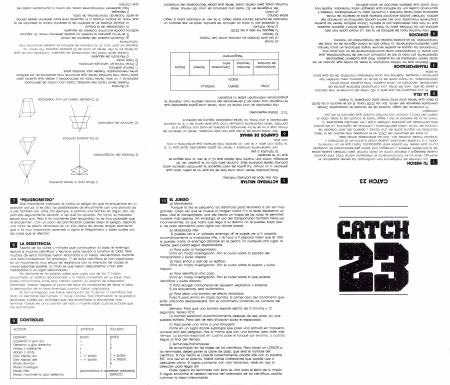 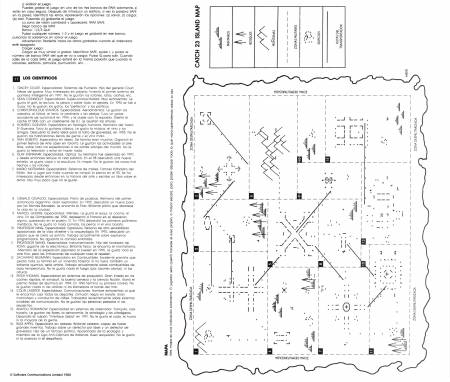 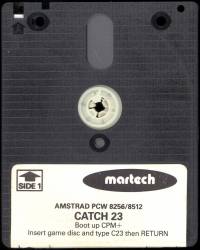 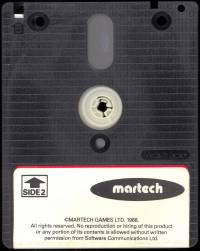 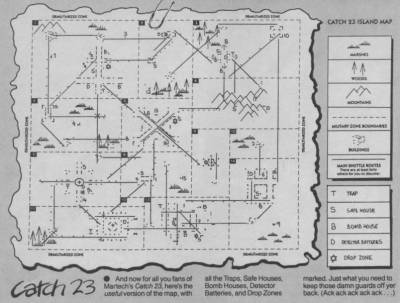 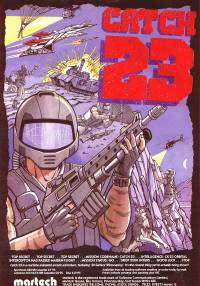 The disc images, obtained from the original version of Catch 23, have been recorded and verified.

Below you can download the game manual for Catch 23 or view it online.